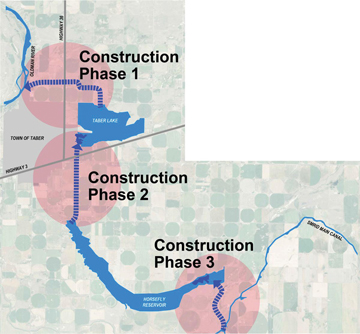 On Nov. 23, the Honourable Catherine McKenna, Minister of Infrastructure and Communities, and Merrill Harris, Reeve of the Municipal District of Taber announced $9.8 million in approved funding for Phases 2 and 3 of the Horsefly Regional Emergency Spillway Project.
During a live stream event, Minister McKenna reaffirmed the Government of Canada’s ongoing commitment to the safety and well-being of Canadians.
“The Government of Canada is helping communities across Canada better manage the risks of disasters triggered by severe weather events and a changing climate.” Announced, Minister McKenna. “This important project in the Municipal District of Taber will help make over 60,000 people across the region more resilient to flooding. Through our Disaster Mitigation and Adaptation Fund, we’re investing more than $9.8 million to help protect residents, their properties, and crops from flooding.”
In the last 10 years, the Municipal District of Taber and surrounding southern Alberta region has experienced five 100-year flood events resulting in millions of dollars in widespread property, farmland, and infrastructure damage, while forcing several residents to evacuate their homes, causing undue emotional distress for many across southern Alberta.
In 2010, the Southern Regional Drainage Committee was formed for the purpose of developing a long-term solution to the ever-increasing stormwater runoff events occurring in the area. Municipal and other partners on this committee include the Municipal District of Taber, the County of 40 Mile, Cypress County, Lethbridge County, Warner County, Cardston County, the Town of Taber, the Town of Bow Island, the Town of Coaldale, the City of Medicine Hat, the St. Mary River Irrigation District, and the Taber Irrigation District.
“SMRID would like to thank all of our collaborating partners. We all recognize the importance of controlling storm drainage to prevent damage to homes and infrastructure.” said Gary Franz, Co-Chair of the Southern Regional Stormwater Drainage committee. “This extra layer of water security will highlight continued diversified investment in agricultural and food processing right here in western Canada.”
The irrigation water delivered by the Main Canal of the St. Mary River Irrigation District (SMRID) supplies approximately 200,000 ha of irrigated farmland in southern Alberta. In the past, as stormwater runoff would overwhelm and threaten the Canal’s structural integrity, an immediate shut off of the Main Canal was the only preventative measure against a potential breach. The shut off, however, results in the loss of vital irrigation water needed to maintain high-value specialty crops and essential drinking water to many residents across southern Alberta. A 2015 published report titled “Economic Value of Irrigation in Alberta” by the Alberta Irrigation Projects Association estimated a total of $230 million in direct farm loss (if the Main Canal were to breach), with a further indirect loss of $585 million to Alberta’s economy.
“All of the value-added industries that have come to southern Alberta have done so because of water security,” explains, Reeve Harris. “They know that each year, the irrigation infrastructure that is in place and the water security the infrastructure guarantees results in the continual supply of raw product needed for their factory or plant. The announcement of this funding under the DMAF program provides one more layer of water security for farmers, residents, and the agri-food industries that call southern Alberta home.”
The Horsefly Regional Spillway is a three-phase project totaling $47 million, intended to divert water at a rate of 55 m3/s from the SMRID Canal to the Oldman River. Phases of this project include:
•Construction Phase 3) Upgrades to the SMRID Main Canal to the Horsefly Reservoir
•Construction Phase 2) Upgrades to the Horsefly Reservoir to the Taber Lake
•Construction Phase 1) Upgrades to the Taber Lake to the Oldman River
In the last 4 months, the Municipal District of Taber has received a total of $39 million in grant money from both the provincial and federal governments. This latest contribution of $9.8 million from the Disaster Mitigation and Adaptation Fund (DMAF) for phases 2 and 3 builds on the $8.8 million already invested for Phase 1 through the Investing in Canada Infrastructure Program (ICIP) by the Government of Canada.
Contributions from the Province of Alberta include $7.4 million for Phase 1 and nearly $13 million for Phase 2 and 3 through the Alberta Communities Resiliency Program (ACRP) TIER Fund. Municipal partners are responsible for funding the remainder.
“This latest contribution from Infrastructure Canada helps bring us one step closer to making this project a reality.” explains Reeve Harris. “We are extremely grateful to Minister McKenna, our local MP Martin Shields, our local MLA Grant Hunter, and all our Southern Regional Drainage Committee partners for their contributions and continued support.
“The Municipal District of Taber is proud to be partnering with Infrastructure Canada to ensure the ongoing safety and security of residents across the region while creating up to 150 new construction jobs at a time when jobs are needed most. The long-term economic impact these infrastructure upgrades will provide, not only stops the devastating loss of important farmland and high-value specialty crops but provides the necessary groundwork to attract further investment in the agricultural and food processing industry, leading to further job creation and a brighter economic future for all southern Albertans.”