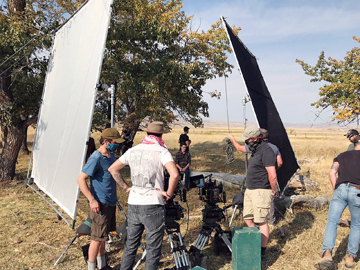 SUBMITTED PHOTO Logan Neubauer gets ready for a day of filming on set for a McDonald's Canada commercial.

Alta. Newspaper Group
If you’re watching TV this week and commercials hit, it might be worth it to watch through them.
A new commercial for fast food chain McDonald’s based around sustainable agriculture and Canadian beef features a young area farmer who shares a bit of his family’s story.
Logan Neubauer is a fifth generation farmer at Neubauer Farms in Cypress County and says being able to be part of the commercial was rewarding.
“It was surreal,” he said. “This is something I never really thought I would get to do and something I would do again.
“It was really cool to be around the directors and to be in that atmosphere, and to talk about my family’s history.
“It’s something I’m very proud of.”
The commercial is 60 seconds and has clips from a number of young farmers telling parts of their stories and what they love about farming.
The 16-year-old is in Grade 11 at Eagle Butte High School and has been working on the farm for as long as he can remember.
“It’s hard to say at what age I started working on the farm,” Neubauer said. “Living and growing up on a farm, you’re always really exposed to the atmosphere. When I was young I’d always go for tractor rides and go to branding, then I started to get little tasks here and there.
“Now I’m here at sixteen and basically full time.”
Neubauer says there is plenty to like about being a farmer.
“It’s really hard to narrow it down to one or two things,” he said. “I really enjoy working the farm equipment and the whole machinery side of things is something I’m quite passionate about.
“The calving side of things is also incredibly rewarding.
“With farming, you get as much out of it as you put into it and the reward after you put so much hard work into something every year is amazing.”
While many will just see the final product, the process to be included in the commercial started in September. Neubauer says it was fun and interesting to be part of the commercial.
“McDonald’s was looking for families with long histories to share their stories,” he said. “I did some online interviews in September where they asked me very similar questions to what they asked on the day of filming.
“We filmed just outside of Lethbridge and it was a full day of talking.”
As for what he orders from McDonald’s, Neubauer says he likes to change it up, but will pick a Big Mac more often than not.
For anyone without cable, the commercial can be seen on YouTube on the McDonald’s Canada page.