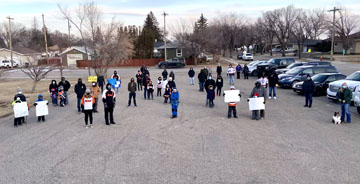 Forty-six attendees gathered beside the Servus Community Arena for Bow Island Minor Hockey’s participation in the province-wide ‘Let Them Play’ rally in hopes of getting kids back to playing sports on Jan. 26.

Young athletes across the region participated in a province-wide ‘Let Them Play’ rally in hopes of getting kids back to playing sports.
Bow Island Minor Hockey had 46 attendees at its event on Jan. 26 beside the town’s arena, while a similar demonstration took place in Medicine Hat, featuring young athletes of all kinds.
Teams haven’t been able to participate since it was announced in November that all indoor sports would be prohibited due to an uptick in COVID cases, and Hockey Alberta has set a Feb. 1 deadline to determine plans for continuing competitive league play.
“We were approached by (the) Bentley Minor Hockey president on Saturday to say that this is what they were planning and did we want to be a part of it and at that point we said ‘Yes’,” said Chantel Timmons, BIMH president.
“The more people, the more faces we had, and just doing it peacefully with all the COVID restrictions in place ? and following all those restrictions ? and we thought collectively we could take a picture, and each association that was doing it takes pictures and we can send them in as one group (and) minor hockey speaking on behalf of all youth sports in Alberta.”
In Medicine Hat, 12-year-old Rowynn Biffart was out with signs trying to gather support for a return to all sports — in her case, swimming.
The Medicine Hat Waves athlete was out advocating for her club and swimmers of all kinds,  insisting they followed strict protocols with great success in the earlier days of COVID.
“My club is like a family and I love my coaches. We have very strict protocols we have to follow with swimming and we did,” Biffart said in a message to the News. “There is nothing we can do on land that replicates swimming and it is so hard to not be able to swim. I was on the highway to my very first Alberta provincials when we got the call it had been cancelled. I will never get that back and it makes me so sad, but I try to stay strong for me, my little brother and my club.”
While Alberta was sitting at 8,203 active cases as of Wednesday evening, Timmons says she hopes to see the province take a regional relaunch approach, which would allow smaller communities to return to play.
“If they (Alberta Health and the provincial government) were to  look at this regionally as it was done back in October, then it should be very easy,” she said. “So to me, to approach it regionally again and give these kids some sort of mental health break, because (that) right now (is) what they’re all suffering from.”
Timmons says the whole reason kids get into hockey is because their friends play and they want to spend time with them and learn to love the game.
“Then those friends they play with throughout the year — they become more than friends and teammates — they become your family,” said Timmons.
“You go through the highs and the lows with your family throughout your whole hockey career and not having that family is a big deal when you think of it for an entire season.”
Timmons wants to see a safe return to play where players would be allowed into a cohort on the ice for practices to maintain the skills and develop more going into the off season.
Timmons’ son Dacey and his U18 AA team in Taber managed to get only two games in this year before the recent shutdown down. Dacey says he’s been trying to skate around as much as he can on an outdoor rink.
“You can’t really do anything other than sports in a small community,” said Dacey.
“Especially in quarantine, you can’t hang out with friends or anything. It’s been kind of tough just sitting at home not doing a lot.”
— with files from Ryan McCracken, Alta. Newspaper Group