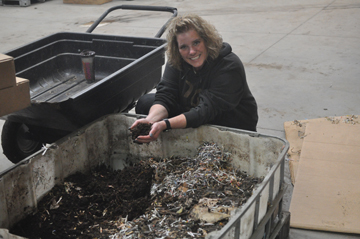 T.R.A.D Worm Industries is located just off of the Holsom Road on Range Road 65 in Cypress County and its focus is on vermicomposting of waste materials.
The company takes land-diverted waste, before it’s processed and then fed to the worms.
“We feed anything,” said Roxanne Doerksen, T.R.A.D Worm Industries owner.
“We have (a) lot of customers that drop off their compost. Some of it is, ‘Oh, shenanigans,’ and some of it is no big deal. We want to learn to process all organic waste and feed it worms. Sometimes worms like it and sometimes they don’t and some we’ve had many epic failures. So that’s the difference—we’re a composting company.”
Doerksen says anything from dog hair to human hair to construction demolition like drywall come in.
“We process it all,” he said.
“We have big muffin monsters on the other side, process it all into a goopy paste, and then we can feed that straight to the worms, depending on what we’re trying to go for. If we’re trying to go for a really heavy fungal masks—which our soil is super depleted in—or we pre-compost it for weeks and feed that to the warms. And depending on what the outcome is of the compost and what we’re going for out of the worms, we can amend it and tweak it a little bit.”
The worm farm’s focus is to produce the most biologically diverse castings, so there is less of need to use synthetic fertilizers and soil amendments.
“The reason we picked worms is let’s be honest, there are nature’s answer for what we’ve been doing to our soil,” said Doerksen.
“They’re a huge part of the health of our soil. The average in Canada, we’re supposed to have 50 worms per one cubic foot of soil. I have never done a soil sample where I haven’t even got close to that. We’ve been doing our soil dirty for a long time and castings are an easy way to bring back all the biology, micronutrients, the bacteria, the fungi in the soil in the right ratios without worrying about burning it or synthetics inputs.”
The worms are raised right from cocoons.
“We’re really lucky that we have a very good breeding process,” she said.
“We have a farmer close to us that breeds warms with us—but specifically supplies for our worm needs.”
Doerksen said she often gets the question of how long worms live for.
“In captivity, these kinds of worms can live for eight years,” she said.
The farm has specific beds dedicated to 1,000 cocoons and are counted every year.
“We just feed them to just make sure we’re breeding as fast as we can,” she said.
In order to reproduce, two worms can’t be asexual in reproduction—so two worms are needed to reproduce and hang out for three hours to produce a cocoon.
“That cocoon takes between 80 to 90 days and it will birth a live worm?sometimes two, three (or) four? depending on how good we’ve been at keeping the beds perfect,” she said.
Then it takes another 30 to 50 days, depending on the temperature for the movement to the adult stage.
The farm is working on how to get rid of Canada thistle as their 2021 research project.
“We have a kid that operates a drone and goes out and finds our drone patches and we’re going to treat just there to see if we can get rid of Canada thistle,” she said.