Be aware of snakes while out on the regional trails 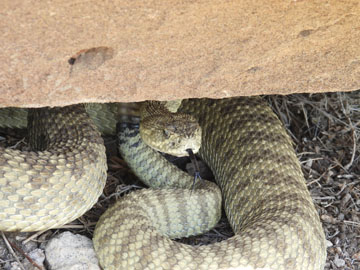 Photo submitted by Sandi Robertson A rattlesnake is pictured coiled up underneath a rock.

The summer months have arrived and people need to be aware of the abundance of snakes that are slithering about in the region.

Southeast Alberta has six species including the rattlesnake (the only venomous specie of the group), bull snake, wandering garter snake, plains garter snake, the Western Hognose snake and the Eastern Yellow-bellied racer.

“Definitely the snakes are way more scared of people and dogs, than people are of them,” said Sandi Robertson, Alberta Fish and Wildlife biologist.

“People either loath snakes or love them. I meet equal numbers of people who are absolutely terrified of snakes and people who absolutely love snakes. None of them are vicious creatures. They are just doing their thing on the landscape and don’t want to be bothered by people or our pets.”

Robertson said it’s when people think they have the ability to pick up the snake safely or they’re showing off for their friends that they get bit.

“I mean there have been cases when people get bit as they walk by a snake that’s maybe tapped under a sage bush or a rock or something like that,” she said.

“Those are rare, but that can happen. But most snake bites are because people are harassing and bothering the snakes and same with the dog.”

People should be aware while spending time outdoors in the area that snakes are now fully coming out of their winter dens—which is also known as hibernacula.

There is more of a snake presence near the paths in the River Valley area of Medicine Hat and Redcliff in the summer months, where the slithering serpents like to use the open patches to warm up.

“They are on the move now,” said Robertson.

“Some species and some individuals will mate at the borough or at their den before they depart for their summer. Some rattlesnakes, they depart from the den and then throughout the summer they’re looking for mates and also looking for food sources.”

When Robertson does presentations, her focus is to calm fears.

“A lot of people do really think that snakes are going to chase them down, that the snakes are out to get them,” she said.

“Whereas they definitely are not out to get them.”

People are encouraged to turn around and go the other way or cut a wide birth around while the snake is basking on the trail.

“This is snake country,” she said.

“People need to be observant and diligent when they’re going out for their walks or when they’re hiking in this area.”

Robertson does not know the population sizes of different species, as she says snakes are a really hard species to survey.

“Rattlesnake is designated as a species of special concern,” she said.

“We do have concerns about its population size and it may be on the decline—we don’t know. That’s one thing that I’m currently working on. So, I’ve been monitoring dens and looking for new dens we don’t know of.”

The Hognose snake maybe at risk as well, but there is limited information to suggest this reptile is.

Robertson said in general all of the snakes are at risk because of  habitat loss, intentional persecution, road mortality.

A Snakes of Alberta brochure is specifically tailored to the southeast region and is available at http://www.alberta.ca.