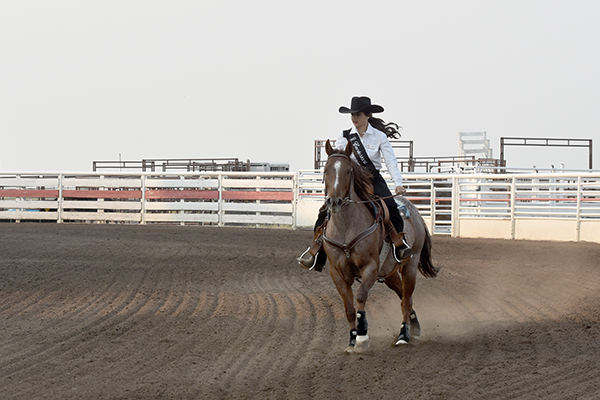 NEWS PHOTO LAUREN THOMSON Bailee McNaughton, recent graduate of Medicine Hat High School, rides in the horsemanship portion of the Medicine Hat Exhibition and Stampede Rodeo Royalty Competition on July 15. Queen and Princess will be crowned tonight during intermission of the Summer Pro Rodeo in the Grandstand Arena at 8 p.m.

Bailee McNaughton, born and raised in Medicine Hat, graduated from Medicine Hat High School this June and will be taking the next to focus on her role, a dream that began years ago.

McNaughton said her mom was a part of the Farmers’ Market, and she joined her every Saturday.

“From the time that I was five, I would get the Stampede Royalty’s autograph every time I went to the Farmers Market or the Stampede. I think I have like 20 signatures of the same girls,” McNaughton laughed as she recalled. “They were my role models back then. As a young girl who wasn’t born on a farm, looking up to the MHS Royalty was big for me, because that was a goal I had.”

She started taking riding lessons at Midnight Trails at age 12, where she began volunteer teaching a couple years later. She bought her first horse unexpectedly when she bonded with an abused Tennessee Walker.

“I bought her and decided that I was going to attempt to train this horse by myself, even though I had no experience,” McNaughton said. “There were ups and downs, there were times when I was thrown off. She taught me a lot, and I know I taught her a lot too.”

McNaughton sold her Tennessee Walker and bought herself a Quarter-horse named Zeus, who is better suited to rodeo. She spent the last year training him and is riding him in the competition.

She says she enjoyed all the aspects of the competition, but that her favourite part has been seeing the kids in attendance and how they already look up to her.

“There was a little girl at horsemanship that also came to speech night. When I was done my speech she drew a picture of me and told me I did a really good job. She came up and gave me a hug and wanted a picture and an autograph. Honestly, that’s what it’s about for me,” McNaughton said. “When I heard the competition was starting back up, I thought, ‘It’s now or never’ and I just wanted to jump right into it, because my main goal for the next year of being Queen or Princess is to be that role model for the little girls that are like me.”

Rayelle Smith, who is the current Rodeo Queen, says she has enjoyed assisting the competitors, trying to help them feel comfortable and answering their questions. Both Smith and Dionne Freimark, current Rodeo Princess, have helped with horsemanship demonstrations and participated in the fashion show, among other things.

Smith says the advice she would give the incoming royalty is to “go into every situation and be kind, because you don’t know what that person’s going through, or what they have gone through. In the roles we’re in right now, I get to talk to and impact way more people than I would just living my normal civilian life. Be kind, even though you may be having a bad day.”

You can find out the results tonight at the Summer Pro Rodeo at 8 p.m. The participants will be crowned during intermission in the Grandstand Arena.