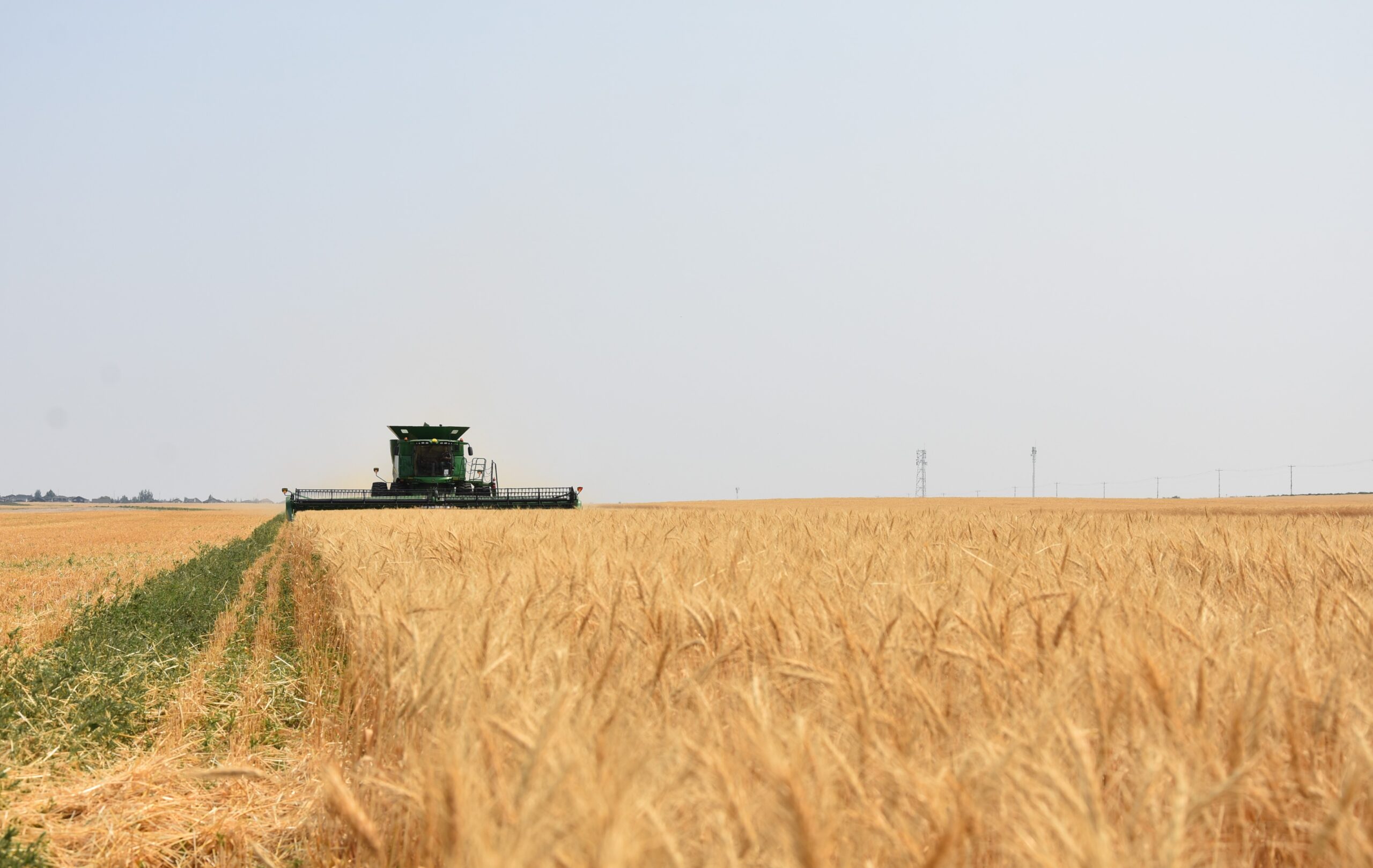 The Medicine Hat chapter of the Canadian Foodgrains Bank harvesting 70 acres of wheat in a field near Rolling Acres Greenhouse earlier this month, which will be monetized and used to help alleviate hunger in Third World countries.

Canadian Foodgrains Bank is a non-profit nationwide organization that runs various projects in order to help people in developing countries.

Charlie Redpath has been involved with the CFB for more than 20 years. He is the co-ordinator of the Medicine Hat and District Growing Project.

“The Canadian Foodgrains Bank is made up of different church organizations and they supply food to Third World countries for people that are out of or short on food,” Redpath said.

“We started working with them in 2000 on a project here in Medicine Hat. Every year we seed a field with a crop. This year we have about 70 acres of wheat. We harvest that and the proceeds go to the Canadian Foodgrains Bank.”

“We sell it and send the money. The freight is cheaper on the money,” Redpath laughed.

Redpath says ever since the inaugural year, they’ve been able to rely on volunteer help.

“We have machinery dealers that supply combines, we have a truck driver or two that supply trucks for hauling the grain, the grain is taken directly to the elevator and sold.”

Western Tractor was one of the companies to supply a combine for the harvest. Troy Aberle, who works for Western Tractor, was in attendance. He says the company has helped out every year Medicine Hat has done a CFB growing project.

“It’s a good cause, it’s helping out humanity around the world,” Aberle said. “Being part of the community is what makes it work, if nobody worked together for these causes it just wouldn’t happen. We’re just one piece of the wheel. We’d like to thank the Weiss family as well because they are the ones who seeded and provided the land. We’re grateful to be a part of it.”

Ary Vreeken, who has previously worked for the organization in many different roles, is now the regional representative for Alberta with CFB. He came from Calgary for the day and says part of his job is to support the growing projects going on, of which there are about 30 in Alberta alone.

Vreeken lived with his family in Niger for seven years, so has firsthand knowledge about what life is like for a farmer overseas.

Vreeken also noted that a good part of donations and money raised is used in directly providing food for people who have been displaced or affected by war and violence, or farmers that have had crop losses because of locusts or droughts.

“We use the money to buy from regional farmers in the area. So if there is a famine in Niger for instance, we would go to the next country, purchase it and bring it in.”

They also do malnutrition treatment and teach farmers to grow better crops, so they can feed their families year round.

“Farmers are really smart, they’re good farmers over there, but the weather change is affecting them,” said Vreeken. “They used to have a drought every seven years in Ethiopia and now it’s every three to five years. It’s harder for them to recuperate between droughts now, and so we do a lot of soil conservation techniques and water harvesting; trying to use more conservation practises, which we do here in Canada.”

Vreeken loves his work with the organization and the sense of community and connection it fosters.

“It’s always been very rewarding work for me, especially when I was working overseas. Knowing there are farmers here doing this to help farmers overseas – that connection from farmer to farmer is so cool. And farmers in developing countries are just amazed when they hear that farmers here would do something like that.”

The final harvest for this year was 1,879.4 bushels of wheat, and the protein level was 16.2, a much better yield than they were expecting with the current weather.

You can find out more about the organization or make a donation at foodgrainsbank.ca.