Assistance on the way for beef producers 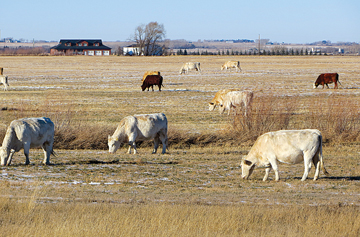 In response to growing need for support across the country, the governments of Alberta and Canada have announced a joint AgriRecovery program to provide assistance for beef producers.

The government of Alberta is making $136 million available under the program, with $100 million from the federal government for immediate relief. The current plan for this program is to offer $94 per head immediately to help cover the cost of breeding female cattle, with a payment of $104 per head later in the year, for a total of $200.

While the intention is there, some beef producers are skeptical of the efficacy of this program with current conditions and rising costs of keeping cows over the winter.

“It’s a great gesture,” said Gordon Musgrove of One Tree Longhorns. “But in reality,  I’m hearing these guys are wanting $200 a ton for feed. That first payment pays for a half a ton. And depending on the winter, one cow can eat up to three tons. On top of that there’s speculation that this might actually make the price of feed go up.”

“I’ve been doing this long enough now that this kind of thing is not new, and we always seem to figure out a way of getting through it,” said Musgrove. “I guess if I had the answers then I’d be rich and famous. What we do is just carry on and search for answers and some questions come up. So that’s what we’ll do again. I’ll be looking more into it, of course. If somebody else gets 100 bucks a cow and I don’t, and the hay prices, the same thing for both of us, well, he’s better off than I am.”

In addition to the payments per head, Alberta Environment and Parks will now be allowing existing grazing disposition holders with additional grazing capacity to allow the livestock of other producers who are in need onto their land.