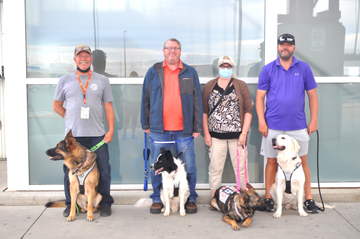 The federally operated Meliora Service Dogs organization started its Alberta chapter last June when trainer Jamie Billings moved to Redcliff from Ontario and did not see any service of its kind locally.

The program serves veterans, first responders, police officers and their families if they require a service dog for medical reasons and referred to the organization by a doctor.

Meliora Service Dogs will then go and provide free training to get up to that level of service.

“There’s (a) lot of levels in service dogs,” said Billings.

“A service dog cannot be a certified dog until at least 14 months old. If the dog is around 10 weeks, we start training. That’s how long it takes if the dog is right on. Usually, a dog that starts training to end is almost two years before they’re certified.”

The different levels of service dogs include a Level 1 where the dogs can’t go into a store alone and have to be accompanied by a trainer, Level 2 sees them training on their own in public areas because they are deemed safe and once Level 3 hits, the canines are considered certified service dogs and Level 4 allows the pooch on trains and planes.

Each handler will have a different coloured-card to identify what level their dog is.

“This takes months, it doesn’t take days,” he said.

“What I do is train service dog teams … if the dog has an issue, yes I help with hints, secrets, trying to get the dog back on track. But it’s up to the team (and) the handler. I might see them two to three times a week, then they have to keep it going. Training for a service dog is usually five to six sessions a day, 20 minutes a day, seven days a week until they’re certified.”

The dogs are trained up to certain human conditions such as for those that battle PTSD, where the dog will keep people away from their handler if you don’t like people around with their body in a non-vicious way and other instances could see them recover medicine.

Billings was diagnosed with severe PTSD from his military days and was taking 10 pills a day, but once he got a dog, he was pill free.

“The dog’s my medicine, he said.

“So, when I start to feel weird, my dog becomes my grounding point.”

B.J. Brooks is a Redcliff Legion member and began  the program with his dog Cruz in November 2020.

“I did 25 years in the military—I slept two feet from somebody—but now I can’t do that,” said Brooks.

“So, the pup here keeps them away from me. As he stands now, he’s blocked now between you and I, so you’re not coming anywhere near me. The dog’s like an obstacle, so that’s what he does. If somebody keeps walking (towards) me, I dig my feet in and tell him to block and he is right in front of me.”

Brooks said Cruz keeps him grounded as time goes on.

“I can walk away,” said Brooks.

“ I can just separate myself and now he is fully trained. Like I said, we can go anywhere I can go and no fear of being ejected or kicked out or having people in your face just poking you. Awareness is coming along big time, more and more.”

Meliora will provide the dogs and dogs are also donated to the program from kennels.

People can email Billings at servicedogs@redclifflegion.ca  for more information.