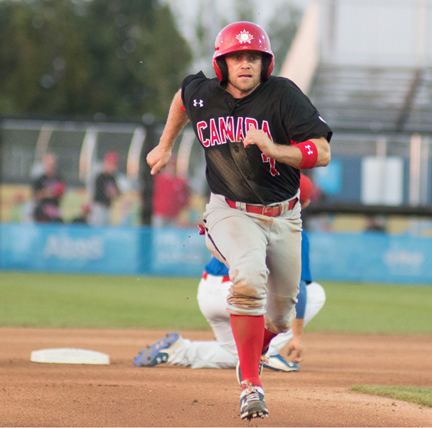 PHOTO COURTESY OF OLYMPIC.CA - Etzikom's Skyler Stromsmoe, heads for third base in the gold medal game against the U.S. in Sunday's PanAm Games action. Team Canada went on to capture the gold, beating the U.S. 7-6 in extra innings.

By Jamie Rieger
With files from the Medicine Hat News
It took extra innings for Canada’s men’s baseball team to beat Team U.S. and capture the gold medal at the PanAm Games on Sunday and local man, Skyler Stromsmoe was a big part of the action throughout the tournament.
It was a misguided throw into right field by U.S. pitcher David Huff in the 10th inning of the gold medal game that allowed Stromsme to score the tying run and teammate Pete Orr the winning run and clinching the championship for Team Canada.
Stromsmie feels fortunate playing in the PanAm Games for a second time and defending Canada’s gold medal from four years ago.
“I’ve never been such a great player, just I’ve been very fortunate to be at the right place at the right time and good things have happened for me,” Stromsmoe told the Medicine Hat News prior to the start of the PanAm Games. “I’m still playing, they’re still paying me to do it. I do have the farm back in Canada to come back to whenever it’s done.”
Once a Medicine Hat Maverick, before that in the Gas City’s American Legion program, Stromsmoe was always the kid who thought he could. Generously listed as 5-foot-10 and 175 pounds, his minor-league statistics aren’t eye-popping — in 543 games he’s got a .249 batting average, always close to the big leagues but never called up by the San Francisco Giants who signed him in 2007.
At this point he knows it’ll take some luck to make it happen.
“There’s definitely a few guys ahead of me. At this point in time in my career, I think all along I’ve been the organizational guy that can go in and plug holes anywhere.
“But… If I didn’t think I could make the big leagues, I wouldn’t still be playing.”
Coming off a dislocated shoulder suffered this spring, Stromsmoe has appeared in just 18 games for the River Cats. He admits the lure of Team Canada had an impact on deciding to return for the summer.
“I thought, man, if this is my last year playing… what a way to end my career, to get to play for Canada in Canada,” he said.
Four years ago the Canadians were the surprise of the tournament. Cuba had won the previous 10 Pan Am gold medals in baseball but lost to the Americans in the semifinals. Stromsmoe hit a home run in Canada’s 5-3 semifinal win over Mexico, then their pitching shut down the U.S. in a 2-1 championship victory.
Their chances of repeating aren’t bad, with ex-pro’s like Jeff Francis, Adam Loewen and Shawn Hill.
“It’s kind of exciting, it’s a position none of us have been in before,” said Stromsmoe. “But when it is on your home soil, just like the Olympics in hockey when it was in Vancouver — I don’t know if you put extra pressure on yourself, but at the same time you don’t want to let your country down. You’ve got to defend your home turf.”
Whatever happens, both in his minor league season and with Team Canada, Stromsmoe has another reason to think this might be it: He and his wife Rachel are expecting their first child in late September.
“A little boy on the way, it’s funny… coming in to this year, I thought honestly this would probably be my last year. There’s so many good players coming in each year, I’ve been hanging on by my fingernails these last few years.
“We thought we’d try to maybe have a kid, ended up getting pregnant so I thought whatever happens this year, whether I make the Pan-Am team, whether we win it, whether I make the big leagues, something crazy happens, the highlight of the year is going to be having that kid in September anyways.”