Skater proud to be part of Winter Games 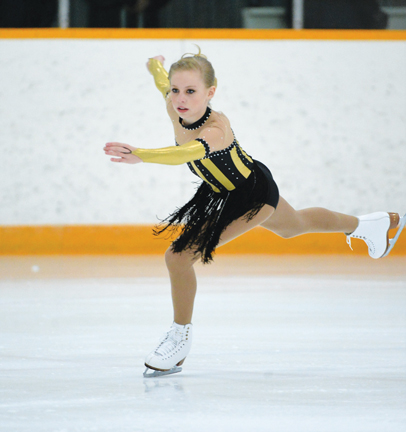 By Tim Kalinowski
Thirteen year-old figure skater Jordan Funk of Redcliff is proud to be representing her home community at the Alberta Winter Games Feb. 13-16.
“It’s bigger than other competitions,” says the soft-spoken Funk. “The level of competition is bigger. I’m a little nervous about it, but I am more excited than nervous. I don’t really have a plan going in. I just want to try and go out there and land everything. When I’m in a lesson we’ll go through the jumps and my stances. When I am doing it I just pretend I am already in the competition.”
Funk has been figure skating for nine years, the last six in Star Skate. Funk skates out of the Medicine Hat Skating Club. She became one of two 13 year-old girls from Redcliff to qualify for the Alberta Winter Games back in November at the Calgary trials. Her cousin Cassandra Forbes, skating out of the Redcliff Skating Club, is the other one.
Funk says people really don’t have a good idea of how hard it is to be successful as a figure skater. She admits she is still learning her jumps, and she even suffered a concussion back in October when one did not land as she hoped.
“Most of the time you will be able to kick your leg out when you land it, but if you don’t you will land flat and fall and maybe hurt yourself. I have fallen quite a bit as I have been learning how to do these jumps. You’ve got to be pretty tough to be a figure skater. You got to build up a lot of leg muscle,” says Funk.
Funk practices five days a week. And it’s not just learning the jumps: She also has to learn how to make it all look graceful and effortless for the judges watching from the sidelines. She skates to a 1920s Flapper routine which also helps get the audience into her performance.
“You got to skate really fast and do a lot of arm movements to kind of make it flow,” explains Funk. “You’ve got to keep your confidence up, and you just can’t say you can’t do it. If you say you can’t do it then you won’t land anything.”
As the Winter Games draw nearer, Funk’s excitement is growing.
“Figure skating is fun. You also get to meet a lot of other people at competitions,” says Funk.
The Figure Skating events during the Alberta Winter Games take place at the Medicine Hat Arena. Funk has also been chosen to bear the Alberta Winter Games torch, and represent figure skating, at the Feb. 9 Medicine Hat Tigers game.