Grizzlies claw their way to victory 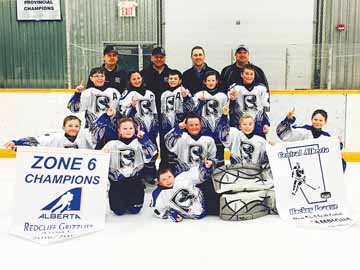 The Redcliff Grizzlies atom tier 2 team won the Central Alberta Hockey League (CAHL)  South Central pennant after defeating the Foothills Flyers. The Griz swept the Flyers in the best-of-three  league final series with a 4-3 Game 2 win at the Kinplex in Medicine Hat on Saturday, . In Feb., the atoms also won the Zone 6 banner and represented the South Zone at provincials in Provost where they won silver on the previous weekend.