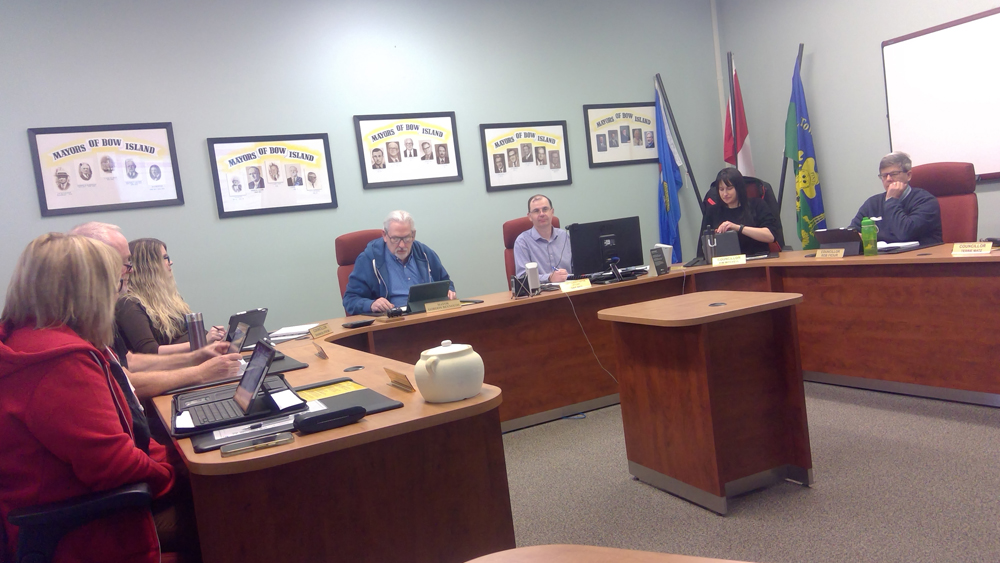 At the regular meeting of the Bow Island Town Council on May 9 speeding in town and the new Traffic Control Bylaw were back on the agenda.

Community Peace Officer Jason Schreiber joined the meeting to deliver the Municipal Enforcement Report for January to April 2022. The full report can be read on the Town of Bow Island website under Government/Agenda & Minutes. Schreiber is attempting to get more proactively involved in traffic enforcement around town and has been altering his shift, working one Saturday in April.

The upside is that when he is visible, drivers slow down but he is finding it frustrating that when he is on one side of town or just got back to the office, he can often hear someone racing by somewhere else. The last couple of months have been a challenge for Schreiber to know where and when he needs to be somewhere, but he is doing the best he can. He has discussed coordinating with an RCMP member for them both to work a Sunday as this seems to be a day of concern in town. Council also mentioned that Wednesday evenings during Market in the Park need more enforcement presence.
The new Traffic Control Bylaw will see the speed limit in Bow Island reduced to 40km/h, except for playground and school zone, which will remain at 30km/h. Council has not received any feedback from citizens about lowering the speed limit and the bylaw was before Council for a second reading.

The discussion in Council concerned a few different roads where signage should be placed. It was decided that each entrance to town would have a sign stating the lower speed limit, with a smaller sign saying, ‘unless otherwise posted’.

Schreiber also requested a ‘new’ sign be added to highlight the change. Mayor Reynolds wishes for the signs to be properly mounted on wooden posts, so they don’t lean or come down in the wind like many other signs in town.

Causing confusion are roads that are technically in town but are perceived as county roads, such as 10 St E. Council decided to alter the wording in the bylaw to list any roads that would not be subject to the 40km/h speed limit and bring it back for a third reading at the May 23 meeting.

E-ticketing was also discussed, which Schreiber feels would have saved lots of headaches and time, but the Government of Alberta is not ready to roll it out. Currently, Bylaw tickets can be written with e-ticketing but Provincial tickets, such as speeding, are still handwritten and taken to courthouse. There is also a Report program with the new system that Schreiber feels is useful as it stores all data, notes, and complaints with the ability to compile a stats report. All data is backed up to the cloud and can be accessed by other municipalities participating in the same program, such as Cypress County.

Contractors and lack of clean-up

Other items Schreiber has been dealing with is contacting contractors who have left behind materials on new house lots. He has also been talking to residents and contractors concerning detached trailers. Many residents don’t understand why they can’t leave a detached trailer on the boulevard but after a conversation are better with it. There have been dogs at large and there was a dog attack on a cat in March. Schreiber said it was a typical spring for dog complaints and some of the new dogs in town that weren’t licenced now are. There is also a vehicle that has been parked on town since last fall with back window shattered. Schreiber talked to owner last week and will be following up again next week.

The Jamboree being held by the EMC Church on the first weekend of July will be free for anyone who wants to go, although they are accepting donations to help offset the cost. Council agreed to waive the fee for rental of the Multiplex rental, which will come with conditions for cleanup afterwards.

The first reading of the Borrowing Bylaw was taken. This bylaw is to authorize the borrowing of $351,000 for the purchase of an Automated Waste Collection Vehicle. The town will borrow the money from the Province of Alberta by way of debenture. The debenture must be advertised for two weeks. First reading was passed by Council.

A new Public Works vehicle has been bought and was picked up at the beginning of May. The first vehicle Council approved to buy didn’t meet the specification and a second vehicle was found. It is an old Forest BC truck, and in good condition with an interior that looks new. The truck is a 2009 diesel with 140,000km. Tires are in excellent condition along with the body and dump box. The old truck is going to be put up for auction to see what can be got for it.

A discussion ensued about the levels of service and what the document is saying will be provided. As Bow Island is a volunteer fire service, the level of service being provided can’t be guaranteed, it depends on who is available when a call comes in and what level of training they have. Council agreed that some wording changes need to be made to the document and it will be brought back to the next Council meeting.

Playground structures being looked at

Councillor Kim Mitchell reported that the Rec Board has had quotes on a few playground structures for Jubilee Park. They plan to do some more fundraising and are looking at a grant application. It is unlikely a playground will go in this year. The board is pleased they are allowed to run with banners at ball diamonds and would like to reinforce they need money for new hockey nets. Councillor Mitchell reiterated her desire to have a facility tour, preferably with Council, the Rec Board and Public Works.

Mitchell stressed to the Rec Board that it was too expensive to keep jumping back and forth between soccer and baseball in the area where they want a fourth diamond. The board would be happy to see it levelled, seeded, and irrigated. There are sprinklers in the ground, but nobody knows if they work. Earth work has been done in that area, so it is unknown what is left of the system. There are no sprinkler heads, they were pulled out, plugs put in, and capped off. Public Works has had lots of trouble with the sprinkler system out there. It is planned to do a tour at the next Committee of the Whole meeting.

Councillor Terrie Matz reported that the Tourism Board is still waiting for initiatives from Council. They can’t move forward on the community garden until they know if they have water to the corner. They are planning to plant flowers around town after May long weekend and would like to know how much town beautification is wanted and how much of a priority this is to Council. The board feels like they are spinning their wheels and accomplishing nothing. Someone has been hired to man the Visitor Information booth. The Yuk Yuk’s fundraiser on May 7th had about 40 people attend and was a good show. Who’s Been Flushed is going to start again on June 1st.

Mayor Gordon Reynolds discussed the issue, which was brought to his attention by Fire Chief Blaine O’Donnell, of semis parking on South Railway Avenue. A request was made by the Fire Chief to put up no parking signs. A motion was made and carried to designate the area no parking.

Mayor Reynolds also reported there is no longer a weather station in Bow Island. The one that was located on the Provincial Building has been moved to Winnifred and he contacted Alberta Agriculture to ask why they chose to move it. The historical data is all still at Bow Island but it not an active weather station anymore.

Dave Matz, Chief Administration Officer has submitted the electrical vehicle charging grant. He also attempted to complete the application for the insulation at the arena, which was the most difficult grant he’d ever seen. At the end of grant it requested a letter from an engineer stating the arena will be a net zero building once the renovation is done, thus, that grant didn’t get completed. Dave Matz looked at another grant, which needs a feasibility study, and he will do a pre-application and then go from there.

Public works are working on the pool, they have it cleaned up and the problems with the surface in the basin aren’t as bad as thought. However, the cast iron service line coming into the pool in the main pump room is rotting away. A welder came in and fixed it as much as possible but there is still a pinhole leak and a fix for that is still being investigated.

Dave Matz also had a meeting with Fortis, who have a new rep for community relations. The town’s franchise agreement needs to be renewed this year, and hopefully Fortis will come in and meet with Council next month. Problems with backup power in town were discussed and a lift station by the Provincial Building is being looked at.

In Correspondence, Seniors Week will be held from June 6-12. Council agreed to cook breakfast for seniors at the Golden Age Centre on Wednesday the 8th of June. The Town of Taber has written a letter to Utilities Commission to join Fox Creek in the concern over increasing utility fees. A notice of application for the Suncor 40 Mile Solar Project was also received by Council.