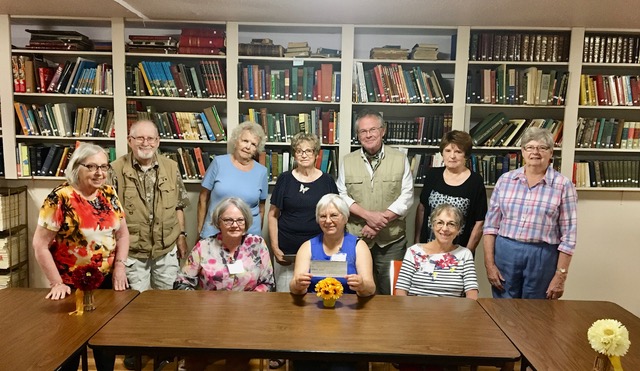 On August 22nd the Etzikom Museum hosted a group from the Medicine Hat Historical Society for a luncheon after which they presented us with a cheque for $10,000. The money will be put toward much needed repairs to maintain the outside integrity of the museum. Those who help with the Etzikom Museum were thankful for their continued support and hoped they enjoyed their time.

As the Etzikom Museum & Canadian Historic Windmill Interpretive Centre closes its doors for the season, they already look forward to the upcoming year.

“The museum had a very successful season this year. We had many upgrades, and we look forward to being offered or offering those upgrades for next year,” said Rachel Stromsmoe, member of the Etzikom Museum society.

The museum executive is also looking forward to some external renovations during the offseason, said Stromsmoe, which, alongside all the upgrading that took place this year, was made possible by grants and private donations from their area community.

“As far as upgrades that we had for this season, they included the touch screens with information about the windmills that we have on the grounds and wildlife in southern Alberta,” said Stromsmoe. “We now have a seating area located in the library that shows a video about the history of the museum and surrounding area. We have upgraded lighting, (there is) LED lighting throughout the museum now. We have increased accessibility with pavement outside a couple of our outer buildings now. We have a new gazebo for shaded outdoor seating right in front of the museum. Yeah, we just look forward to offering these additions for many years to come.”

Stromsmoe credited most of the upgrades as being covered by the Community Foundation of Southeastern Alberta’s rural fund for the area, with the gazebo being a private donation from a local family.

This year was overall very successful said Stromsmoe, with a marked increase in paid admissions.

“There was also at least a 10% increase, I would say, in sales and at the lunch counter and in the gift shop area,” noted Stromsmoe. “It takes a community to help make our museum successful. And we would like to thank various local organizations for their support as well as all the volunteers that made this season successful. And we look forward to seeing everyone next year.”