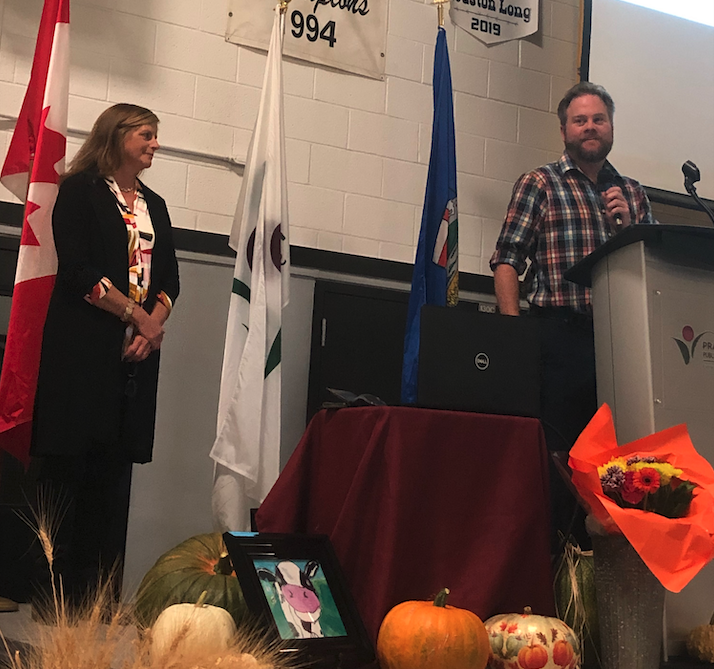 The 2022 executive was on hand to give tours and answer questions at the Agricultural Discovery Centre (ADC) at Irvine School at the start of the Fall Gather and Production Sale.

Reid Vossler, 2022 president of ADC student executive, now in Grade 10 and attending Eagle Butte High School, said, “it was really cool, it was awesome to see the program get up off it’s feet. It was different. Going to school every day gets boring. The animals here give the students to look somewhere to look forward to. Taking care of the animals and doing the chores I think that was by far, the best experience I’ve had. It was a really big honour to be chosen (as president).”

Georgia Howe, vice president of the student executive, is in Grade 9 this year and her family ranches between Dunmore and Irvine. “I think it’s been especially good for the junior high kids who don’t have much of a farm background and it’s good to help do chores. It’s been good for the whole school because it got everybody involved and everyone learned lots. My favourite part was helping all the kids because I come from a farm background, and it was good for all of us to teach the kids.”

Heather Vossler, cousin to Reid, is in Grade 8 now and is treasurer on the board and lives on a ranch about 10 minutes from Irvine. “It’s a really good program, it’s like 4H to me. It’s great for those who live in town and don’t know what to do around animals, they can learn how to do things that they want to do. It helps you grow up. Watching how the animals grow and finish and how they did over the year,” was her favourite part of the program.

The tours took longer than anticipated and the program in the school gym got off to a late start. Principle Trent Rayner welcomed all those attending, “when it (the idea) was brought to me, I said let’s give it a go, what’s the worst that could happen? Luckily, nothing bad happened and this has been unbelievable, mostly for the positives that have come through for who it was meant for, and that is our students.”

Irvine School has 350 students and all had some tie to the ADC. “As we always say,” continued Rayner, “hands on learning is the best way. Instead of having so many of the things in the curriculum through lesson, videos and smartboards, they actually get to go out and get their hands dirty.”

Neubauer spoke next, “we have been a part of the community, where our family farm has been in existence since 1910, we’ve been farming the same land for 112 years. Agriculture is in our roots, and we believe it is an integral part of the Canadian way of life. We couldn’t be more pleased to see what has happened down here.”

Weeks got up to say a few words, “To see you all in our school especially after the couple of years we’ve had is incredible. This took an incredible amount of work and vision; Nichole has been at the helm of this alongside her many staff. We’ve got lots of teachers, educational assistants, office administrators in the kitchen who have set this up. We’ve got artists who have created the tablecloths you are enjoying tonight and the collaged pumpkins.”

Neubauer welcomed President Reid Vossler to the stage with these words, “the whole vision was to create a student-led farm that our students would be largely responsible for the day-to-day operations of and that they would make suggestions and be empowered with the ability to make decisions and make things happen. I could not be more thrilled with the students who are the key leaders from Irvine School who took the bull by the horns and drove this thing forward.”

Vossler received a plaque carved by Marina Cole and a certificate of recognition and explained the day-to-day operations of the ADC, the training the executive received and how they used that to teach the students how to do the chores. “It is great to see such overwhelming support for this event. We had to make sure safety was a number one priority. I can tell you we had corn looking really good, it was almost taller than me, I know that’s hard to believe. We were starting to get huge pumpkins too. At the start of the program, I wasn’t 100% sure I was going to like the pigs, but by the end of my senior year they were my favourite animal. As an unpopular opinion, I would argue the pigs are cuter than the baby chicks. This program has brought many great things to Irvine School, giving students an opportunity, they would never have attending a normal school. It was awesome to see how happy the students were and how much fun they were having learning at our Agriculture Discovery Centre. This makes it exciting to go to school every day and see the beloved animals.”

From the live auction alone, the evening raised over $20K. The money will go back into the ADC, to buy new livestock for next season, feed, to expand the program, or build new infrastructure. By the end of the evening $30,203 was raised and the donations kept coming in. A couple days later the total was up to 30,703.

Neubauer refers to herself as an agricultural evangelist and was applauded by all who spoke during the evening for her innovative ideas and her commitment to seeing the ADC become a reality. She became somewhat tearful at the close of the evening and received a standing ovation from those assembled.

Another fundraising initiative is also underway trying to raise funds for a portable vermicomposting unit from TRAD Worm Industries. The goal is to raise $40K to buy the unit, which will be able to compost all waste, including manure, created by the ADC. This year, the ADC created 5 metric tons of manure, which was all taken to the landfill. A YouTube video has been created about the project and can be viewed at https://youtu.be/P_VD2u2oVTY or under Irvine School Waste Management Project – You Tube.