Not enough rain and too many gophers in southeast Alberta 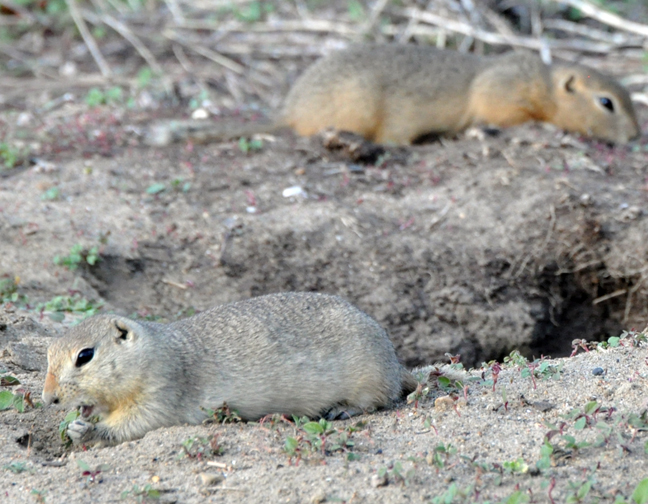 Gophers are a nuisance for anyone in agriculture.

While growers are still hoping for a decent yield off this year’s crop and the recent rains have helped, they came a bit late and gophers seem to be in high abundance this year, causing considerable damage.

Will Müller of Müller Ventures Inc., and Director of the Alberta Pulse Growers, said, “the recent rains have been GREAT! Some of the Dryland suffered a lot early on, so some damage was already done, but the rains should help out a lot of the crops out there. We have a mustard field that really took a hit this spring with the dry weather, but the lentils seem to be doing just fine! Will be another interesting year to harvest. Some of the mustard was already flowering and very spotty on the field, and now we have some just taking off. The rains will help yields but for some of the crops it was just a little too late, to get a really good yield you really need some nice early rains to help get the plants going.”

Kelly Van Ham, Board Director of Alberta Sugar Beet Growers for Burdett and Bow Island, got about 3 inches of rain, or 75ml, on his farm, which has made a huge difference, particularly on the dryland and the peas are now in bloom. While the rain is likely enough to carry the crop in the ground, the subsoil moisture is still zero and it’s probably too late in the season for that to change. Now he remains hopeful there will be some timely rains as the crop progresses.

According to the June 27 issue of Agri-News (Agri-News | Alberta.ca), published each Monday by Alberta Ministry of Agriculture, Forestry and Rural Economic Development, the recent rains could increase disease potential, particularly among cereal crops. “Dr. Michael Harding, crop assurance program lead with Alberta Agriculture, Forestry and Rural Economic Development, says bacterial leaf streak (BLS) remains a risk for wheat and barley, and producers should be watching for it.”

As for pests, Müller commented on there being “lots of flea beetle early on, but most of the crops have grown out of this by now. I know lots of producers in the Vauxhall area really suffered with this, but the Bow Island area didn’t seem as bad.”

Neither Van Ham nor Müller have seen significant numbers of grasshoppers yet, although as Lisa Sulz, Agricultural Supervisor at Cypress County pointed out, they usually come out in large numbers during the hot, dry months, which we are just heading into. Cypress County “participates in a few insect surveys with Alberta Agriculture and we aren’t seeing any high numbers of birth army worm, or diamond back moths,” continued Sulz, which are pests connected with canola.

On the other hand, gophers seem to be in high abundance across both Cypress County and the County of 40 Mile. Van Ham stated, “we’ve seen them in our own crops, especially in the grass areas and moving out into our irrigation. They are a huge a problem and difficult to manage.”

One of the primary issues this year is the ending of registration for liquid strychnine by the Federal Government. “We often get calls about gophers and what kind of solution we can offer now that strychnine is not available,” said Sulz. Poison also affects wildlife further up the food chain, such as owls and hawks, who will eat the poisoned carcasses.

Nichole Neubauer of Neubauer Farms located in Cypress County felt it wouldn’t be surprising if the gopher population density remained consistent, although they do thrive with the drought and dry conditions.

“When we have no rain and the vegetation is limited, the impact of the gophers becomes so much more obvious,” stated Neubauer.

On a flight Neubauer took with her son on June 1, she noticed high concentrations of gopher mounds. “Where there are gophers there are also badgers,” continued Neubauer. “The badgers dig into the gopher tunnels to eat the gophers and in their wake, they leave a huge hole, eroding soil. In fields it can become a huge challenge to farm around because we use guidance systems and autosteer so you can’t just grab the wheel and drive around this huge badger hole, you end up driving through it and the consequence can be quite impactful for machinery repair as the result of damages.”

Even without drought conditions, which heighten all issues for producers, gophers are always a problem. They feed on crops, such as young sugar beet leaves, as well as travelling along seed rows and munching on tender young seedlings. Even a small population of gophers can do extended damage to a field but when they are in numbers such as are being seen this year, it can be catastrophic when combined with the ongoing drought conditions.