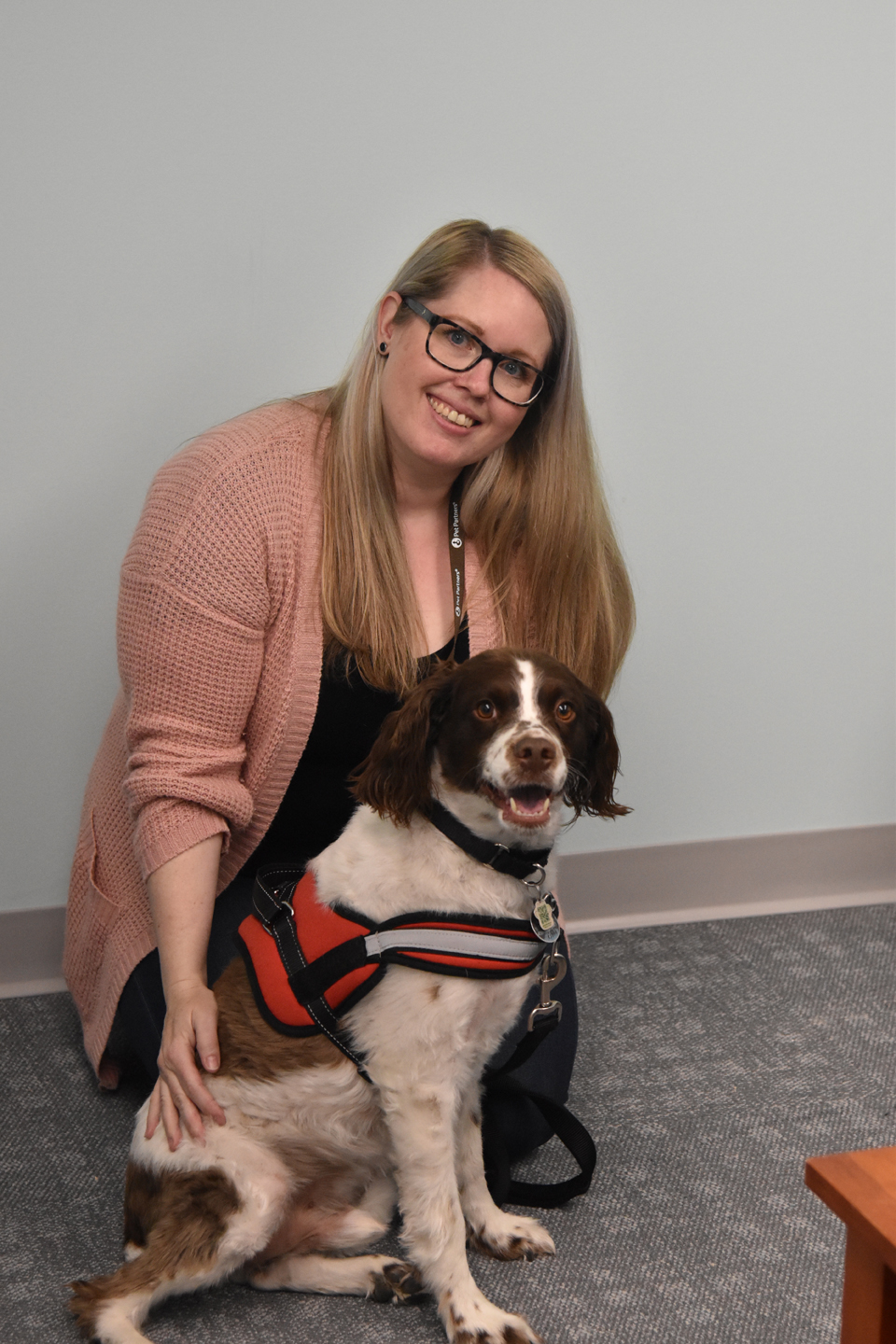 For visitors of the Sanare Centre, some much needed comfort may come in an unexpected furry package.

Lindsay Poloni and her companion, Cooper the Brittany Spaniel, began their journey right before COVID hit, which Poloni added that while it added some time to their training, it may have been good for Cooper, as he got extra practice at home.

“I just thought it would be something he’d be good at. And then of course, with COVID, things got shut down. And at that time, we were just looking at doing things like volunteering in nursing homes and such,” said Poloni. “And then COVID happened, and I had a change in careers. And I ended up here at Sanare. And we finished our training in the fall of last year.”

Poloni is a social worker by trade, and says that it isn’t uncommon for social workers to use therapy animals as a part of their work.

Before Cooper was a therapy animal, he was her personal pet, but she was quick to notice his sweet and tolerant nature. When she would be anxious, Cooper was eager to comfort her, and often ignored other dogs in the park in favour of interacting with people, said Poloni.

“I realized pretty quickly that this would be a really good thing that he could do. And it’s something that we can do together. With the work I do here, because it’s with sexual trauma victims. It’s very helpful having him,” said Poloni. “It makes building rapport with people so much easier. It helps people to feel more comfortable, because talking about sexual violence is not an easy subject.”

As a therapy animal, Cooper’s primary job is to comfort those who come into the centre, and help be a stabilizing presence for them as they talk about their experiences. This can be especially helpful with children, or the parents of children who have experienced sexual violence, said Poloni.

“If someone comes in here and they’re anxious, he will whine, he might whimper and then he’ll usually either lay on their feet or if they’re sitting and they’re okay with it, he’ll lay across their lap. He cues to it really well,” said Poloni. People have also been known to hug him or rub his ears as they speak, and Cooper is notably tolerant of clumsy petting as someone can expect from young children.

Cooper doesn’t only help the people coming in for help, however.

“It’s also really good for staff because this can be really stressful work,” said Poloni. “And so when my team is having maybe a rough day or they’ve had a difficult disclosure, they’ll come and spend time with him. So I’ve noticed that on the days that he’s here, the morale is really high.”

“It was mostly basic obedience skills. So they want your dog to be able to sit and lay down on command, to stay. And you have to be able to recognize your dog’s cues, and really be an advocate for them. And so they do some like scenarios to kind of test if your dog has the right temperament,” said Poloni. “Because not all dogs are good for this kind of work, you might have a great pet at home that you love. But they may not be able to tolerate, you know, crowded people petting him or being restrained by a hug, or, you know, people yelling or getting upset, because in the work that we’re doing, people do yell sometimes, or they do cry and get upset, and he has to not react.”

Poloni said that while it took some time and a lot of practice at home to get Cooper to the level of obedience needed for his certification, he loves his work and gets excited to come into the office.

“There’s a huge benefit in therapy animals, it really does change the atmosphere in a room I believe. And I think that we take for granted how amazing animals are and what they can do for us and how blessed we are to have them and I just think that we’re really fortunate that we can offer that here,” said Poloni. “I can’t imagine doing the work without him now.”