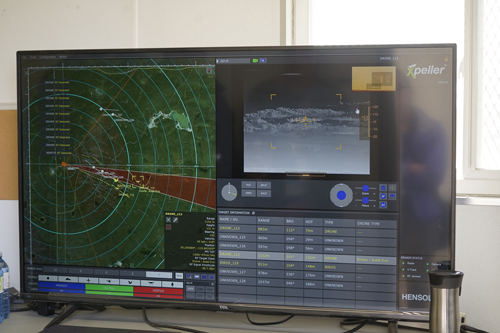 Part of the exercise called for scanning for drones.

As the capability of drones increases, Canadian Forces need to continue to find solutions. The technologies being investigated include how far away can a drone be detected, stopped and tracked. There are drones on the market now that are smaller than 250g, below Transport Canada licencing requirements, but can travel long distances at high speeds and carry high-definition optics.

A call for proposals was put out to companies, asking them to come to CFB Suffield to demonstrate their equipment. “We are also trying to assess other portions of the equipment,” explained Giesbrecht. “How easy is it to deploy? How many people needed to deploy? The electrical requirements, everything that might affect how we use this equipment in the future. There is no one technology that we’ve found that is a silver bullet for counter drone work.”

These systems need to pull all these pieces together into one cohesive whole. Sometimes there are pieces of equipment that are really promising as part of a system on their own and that might be of particular interest to the Canadian Forces. Sometimes companies do a really good job at putting the pieces together and Giesbrecht explained they are happy to explore all aspects of the problem.

Major Raymond Green with the Canadian Joint Operations Command explained, “Canadian Armed Forces needs to understand the threat and ability of the UAS.” The varying sizes of drones, how they perform, what effects they could have, and how to defeat them are all of interest.

QinetiQ from Medicine Hat provided drones for the red team, flying them into the innovators air space. Jay Greschner, field services team lead with QinetiQ Target Systems Canada, explained the different types of drones the red team was using. From the classic DGI Phantom 4, the type used when drones started taking off about 10 years ago, to the newer Mavic 3s, which can be bought for about $3500 and has a 1x and 7x optical lens. “We can see the weapons test centre and everything from 1km away, even count the number of people moving around,” stated Greschner.

The red team also had fixed wing drones of varying sizes. These have a system called shake to wake, the operator who is launching it shakes it three times to start up the propellor. Once it’s going, he throws it and off it goes. The fixed wing drones have a Styrofoam body with a hatch in the middle that houses the autopilot.

There are different ways of controlling the drones and at different frequencies, depending on what type is being operated and the antennae being used. One drone was operating at 2.4GHZ on the Wi—Fi band and the other was operating on the 900 MHz band. “It allows us to offer some different options and scenarios for the innovators to test against. They might be detecting on one (frequency) and not the other. We can put something up and ask if they can detect it and then refine the details, such as having them expand their range so they can detect different control frequencies. Lots of people are focusing on the Wi-Fi frequencies as they are the most popular right now,” explained Greschner.

While we were there, QinetiQ flew an 800g drone (about 6 inches long with 10 inches between the rotors) with a 45-minute battery life. Under Transport Canada, unless a special licence is applied for, this drone can fly at 400 feet (121m). Greschner took the drone to maximum height and flew it 540m distance from the red team base. It is so small that it was easy to lose track of with the naked eye.

“This shows a little bit of the story about why countering drones is so difficult. They are small and maneuverable, and can fly low if they need to,” said Giesbrecht.

Different companies arrived at CFB Suffield over the past four weeks to be the blue team. Last week it was Hensoldt out of Germany and EOS, an Australian/American company. The blue teams were seeking to defeat the drones through either kinetic or non-kinetic methods. Kinetic approaches included being attacked by a blue team drone or being taken out by ammunition. Non-kinetic approaches included detecting, jamming, and tracking.

Hensoldt was using four pieces of equipment for their non-kinetic approach. The first was a direction finder, a controller that uses a radio frequency (RF) transmitter to find the bearing and direction of the controller. Information from it is used engage with the jammer such that it can be moved in the direction of the RF signal.

A radar was also being used. It has a maximum range 40km, although the range depends on the size of target. During testing a 1-2 km range was being used due to the small size of the drones. The radar has a 120-degree arc scanning beam that goes back and forth. If it gets a detection, it will determine what kind of target it is and classify it, such as a bird, drone, helicopter. If the operator is interested in a target, such as one classified as a drone, it will hook the drone and the camera system will swivel toward it to lock on.

The camera system has a daylight camera and a thermal imager to lock onto the drone, track it and identify what it is. The last piece is an RF jammer that breaks the radio link between the drone and controller. The equipment was set up at the permitter of the test area but could also be loaded onto a vehicle and be used on the move.

Bernd Burger from Germany, key sales director and key account manager for Hensoldt’s counter UAS system, thought the IDEaS program was great. “Here we have the perfect conditions and environment to test the systems to their edge. We appreciate support from the IDEaS program, and the exchange with different scientists. A good week for us to learn and test.” Often there are interruptions from cell phones and Wi-Fi, among other things when testing, but out at the base there was nothing and it was a perfect opportunity for testing the system.

Steve Zuber, from Ottawa who is sales for Canadian Programs for Hensoldt, explained “the tricky part in processing is birds look like UAV’s (uncrewed aerial vehicle) and vice versa so it takes some understanding of behaviour and flight pattern to determine which is which. Everything is tracked by the radar and on the track table you will get the range, bearing, height of the target, and type of target. The RF detection, if in the proper alignment, will be able to determine what type of drone it is for drone identification. The operator hooks the target, then the camera slews to the direction at the bearing and elevation of where the target has been defined. He can zoom in and acquire the target visually with the video tracker, which can follow the drone target wherever it is headed, adding another level of identification. The last part of the engagement, if it is determined it is hostile, is with a jammer, because you know from the RF detection system what band it’s in, you would jam on that band, which should break up the link between the controller and then UAV doesn’t know where to go.”

Zuber added, “we brought a portfolio of sensor equipment/sensor solutions consisting of a radar, centre piece, an electro-optical and IR camera, radio frequency direction finder and the radio frequency jammer. They all work together to detect targets in the environment. The drones tend to look similar on the radar so you don’t know what kind of drone it is, which is why our system, once it makes the detection is hooked to the camera system to zoom in and do a physical id on the drone. It may have a payload (such as a bomblet – a baby bomb that are getting quite nefarious in terms of their capabilities) and it may have hostile intent based on its behaviour. We would also know, based on a typical scenario, that our own friendly forces are operating drones in the area.”

On our way over to the EOS site, Giesbrecht stated, “there are a bunch of components to these tests, the sensing, the camera, tracking, then once that’s been demonstrated we can fire at the drones. The drones are expensive enough that we can’t take out an infinite number of them. This is all defensive, it’s all about protecting from drones. Hensoldt is using a non-kinetic solution, a way of defeating the drone by jamming. There are scenarios where drones can be shot down, using a kinetic approach, and others where both possibilities need to be explored.”

Some solutions detect and other detect and defeat. For many places the detect is enough. Knowing drones are operating in the area, whether domestically or overseas, assists in being alert to a situation or knowing there is a problem.

The core of the EOS system is mounted on a Humvee vehicle with two weapons systems, a 30mm cannon, and a 762 general purpose machine gun. There is a small radar on the vehicle that detects the drone and a camera locks onto the drone and aims the weapon for the operator.

Up from Huntsville, Alabama, Steve Below, vice president operations of EOS Defense Systems, said “I’m not cool enough to be from Australia but I did buy the hat. We have a full family of RWS, remote weapons station. An R150, R400, two versions of the R600 – one has weapons on it and the other has four javelin systems to it that we call it the missile carrier – and we have an R800. Naming is very complicated, when the R400 is fully equipped and loaded with ammunition, it weighs 400 kg and the R150 weighs 150kg. Everything below the roofline is common throughout the entire family of RWS. A switch panel unit, a joystick, a display unit and two small computers. The neat thing about everything below the roofline being common is you learn to operate this system you can operate any of our RWS so the learning curve is flat.”

Matt Clark, Junior Program Manager with EOS, walked us through the actual operation. The top unit can rotate 360 degrees in about five seconds, with either a visual or thermal camera to zoom in on the target. There is a stabilization button, if the vehicle and/or target is moving and it is activated, it will keep holding to the target. Another button will calculate the exact distance to the target, after which the vehicle will give a little jump as it computes a ballistic solution for the specific rounds from the weapon type being used.