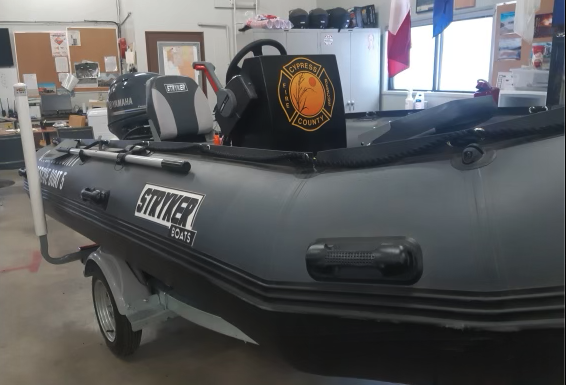 Cypress Emergency Services is ready to once again hit the water, with their new boat.

Emergency services coordinator Jason Linton explained while there was some delay due to wanting to single-source the craft, the boat found its new home at the Elkwater Fire Station in mid-October.

“We just waited for everything to come versus going part-by-part; we just really wanted to have it operational right off right off the bat,” said Linton. “No sense of having it if it’s not ready to go.”

While the boat will be used for responses to any body of water within the county in the event that there’s a need, it will be stored at Elkwater Station.

The reason for this location, explained Linton, is due to data and response times.

“Typically, we do get three or four critical responses a year where there’s calls for service,” said Linton. “And our firefighters can get there typically faster than the Conservation and Parks rescue boat can. So it just makes sense: when people call 911, they don’t care who provides services, just that there is that the service is being provided.”

A majority of the calls requiring the boat over previous years have taken place at Elkwater Lake. For Linton, it’s all about basing decisions for Cypress Emergency Services on solid data to better anticipate the needs of both residents and visitors to the county.

This is not the first boat that the station has had, said Linton, but it was time for a newer, safer model.

“It was at the end of its life-cycle and it was beyond repair,” said Linton. “We actually took it out of service just because we didn’t want to take unnecessary risks; if you can’t respond safely we are not gonna make the situation worse.”

Linton explained one of the essential parts of fire and rescue services is to ensure that the responders don’t become victims in need of help as well, a principle that prompted the replacement of the previous boat to allow for safe surface and water rescues.

The craft has already been out for a spin, and the firefighters at the station are pleased with the performance and safety features of the craft, said Linton.

The majority of the calls requiring the boat will be non-critical surface rescues, such as paddleboarders or other lake goers who have become stranded out in the lake due to wind or water conditions.

But, as the weather turns, the stations have to turn to a different kind of water safety, and will be taking part in ice rescue training periodically throughout the winter to keep their skills sharp. With the ice fishing season upon us, it is important to be ready and knowledgable.

“It’s different techniques of how we get people; obviously we can’t use boats so we have to put on some ice water rescue suits and crawl on the ice and spread our weight, and be able to try to rescue people that have potentially fallen in the water and that can’t get out,” said Linton. “There will be three training sessions throughout the winter, so the first one’s gonna be December 11, another one in January and another one kind of in late winter to early spring.”