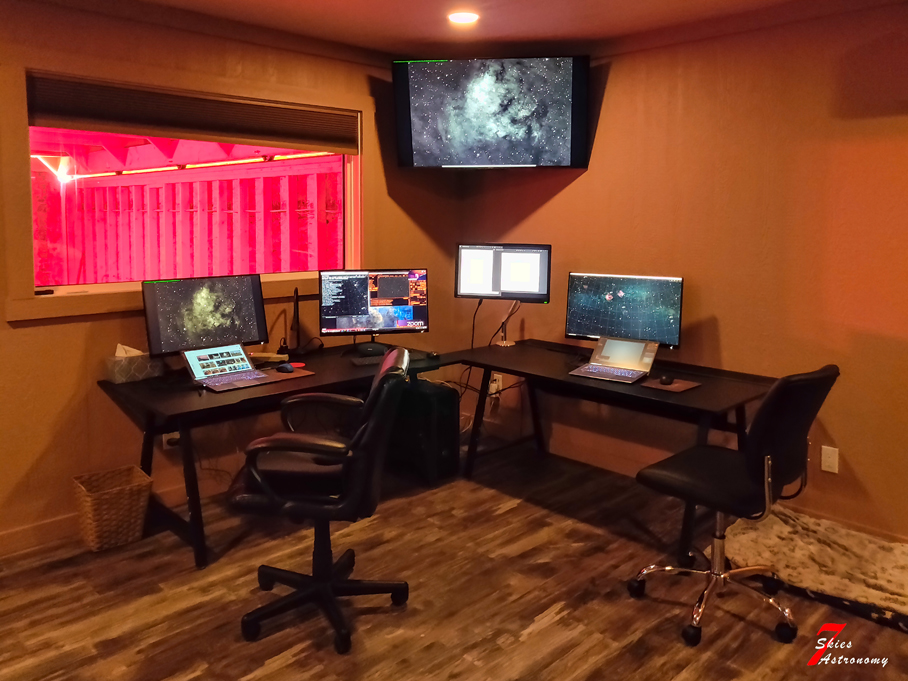 All photos by Seven Skies Astrophotography

The skies seem to go on forever on the prairies, and for many, that endless stretch of blue or black is enough.

For astrophotographers Kimberly and Laurie Sibbald, that’s just the beginning to the beauty and mysteries waiting in the stars and beyond.

The story of what would become Seven Skies Astrophotography begins in 2017, with the solar eclipse that was making a path across the US. The pair made their way down to Oregon, to capture images of it with their first telescope.

“That little trip inspired a passion in us and we’ve chased lots of deep sky objects ever since then,” said Kimberly. This love of the sky brought them out to the Medicine Hat area, in order to escape the light pollution, or “skyglow” of Calgary, to settle near Seven Persons.

The process of getting images of the stars and other deep space objects is much more complex than most understand, said Laurie, as it requires a lot of technical precision.

“The first thing everybody has to understand is that as we’re sitting or standing on Earth; we’re moving, we’re rotating with respect to the rest of space,” said Laurie. “What you basically have to do is counter-act that motion, keep your camera frame still with respect to space, so what we use and people use are these so-called equatorial mounts (type of telescope mount) that counteract the rotation of the Earth to allow you — when you point your camera, — that it stays at the same point in space.”

After that, the technology “cascades,” said Laurie, from special filters to multiple 20-minute exposures to get clear images of the distant skies.

“We’re basically farming photons, as we call it, we’re not typical farmers, we farm photons, gather the photons from space. It takes a while because they’re faint, and the light that comes in is very faint. It takes a while to gather enough of those light particles to add up to an image, so we take a bunch of those. We stack all those together to add up even more of the light to make the image come out,” explained Laurie.

After all the imagery is collected, it has to be processed, said Kimberly, which can be just as intensive as being out in the field with the camera.

“As an example, one picture we have is the Monkey Head Nebula. It’s 13 hours of data acquisition. Laurie’s out there for 13 hours gathering this data for me, I’ll probably sit on the couch for 10 hours to put that single image together,” said Kimberly. “I have that process down to maybe six or seven hours now, but it’s still a very long, tedious process to put these together. It’s just for one picture.”

All of the work is worth it, however, when they’re staring at the completed image, or delving into exoplanet research, a passion of Laurie’s that came with the photography.

“For me, it’s just the magic of what’s out there. When you look up, you just can’t understand everything that’s out there until you stick a camera on the end of a telescope and you start gathering all this light,” said Kimberly.

With the hobby has come an extensive community, all with advice and stories of difficult or exciting captures with every image they share as the “space paparazzi,” as the pair’s website puts it.

The art isn’t easy, battling light pollution and technical troubles, but it’s all worth it to see the final product.

“The biggest challenge is always Mother Nature, right? You’re always fighting the elements. It’s, first of all, light. Light pollution is a huge challenge, and then fighting the clouds and the elements,” said Kimberly.

“We’re passionate about light pollution. That’s why part of the message for us is that people have to understand that kids unless you’re in a rural, dark area, a lot of kids out there saying even in Medicine Hat have never actually seen the Milky Way,” said Laurie.

A lot of city lighting can be overkill in how bright it is, said Laurie, and has a serious impact on what’s visible not only to the naked eye, but to the specialized equipment used to take pictures of the cosmos.

Kimberly and Laurie have come a long way since they first started, as far as having built a private observatory on their property.

“It’s pretty ambitious, we’ve got a very large observatory part, which is not insulated, the roof of it rolls off. AIt reveals three basic three locations for telescopes with three special mounts on them on the so-called piers that are sunk 10 feet into the ground. That facility, that’s all electronic, and passes through to computers in a warm room, which is adjacent to the observatory,” said Laurie. “That allows us to be warm and toasty inside, we’ve got a window and we can operate the telescopes, which are out in the ambient environment, and they have to be out in the event environment; otherwise, heat waves and things get in the way of the imaging.”

The observatory has made it much easier for them to get images on cold nights and to mount their cameras and telescopes with relative ease compared to doing it by hand.

All of this fancy equipment, however, pales in comparison to the one thing any astrophotographer needs.

“You’ve got to have the bug and want to do it,” said Laurie. “It takes a lot of patience. It takes persistence and then there’s the equipment. I mean, there is a decent kind of price of entry to get decent enough equipment, but it’s not crazy compared to some expensive sports hobbies. You can get a decent mount and a decent small refractor telescope, whether you don’t use your DSLR, or a starter kind of space camera, you can do that and go from there. Start small, and connect with the community.”

They hope to be a part of that community, said Laurie, and plan on starting outreach with the younger generation to show them the magic of the night sky, though the details of that are yet to come.

Their work can be found at sevenskiesastro.com