Southeast hiker talks of worldwide adventures during presentation at Redcliff 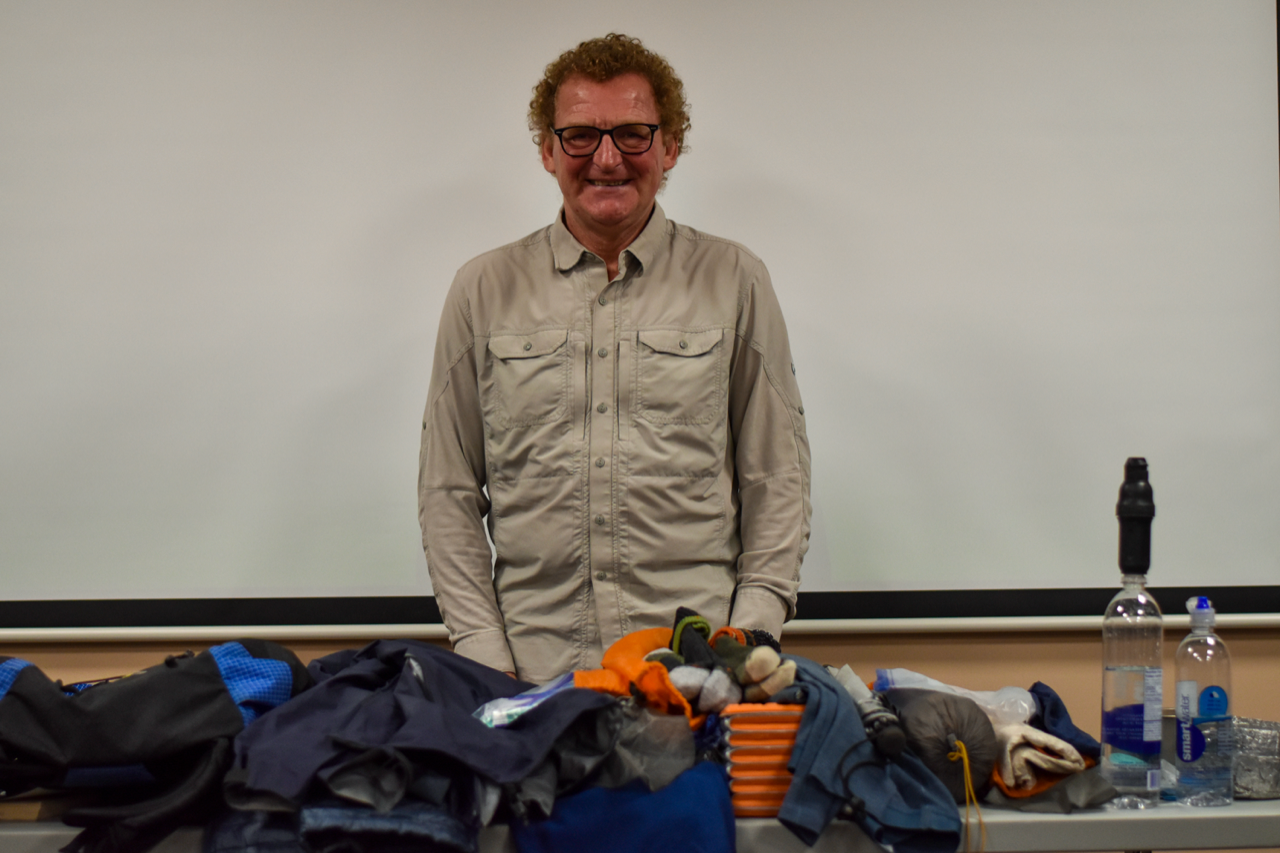 Photo by Anna Smith Andy Simmonds was at the Redcliff Library earlier in January describing his journeys.

Simmonds was at the Redcliff Public Library Jan. 11 to talk about his start in hiking and fascinating global experiences.

Raised on the west coast of Scotland, Simmonds has been hiking since he was a teenager.

“I was brought up in a small fishing village on the west coast with less than 1,000 people. There were no facilities there. They had a soccer pitch and they had the school which had a gymnasium and that was all we got was all we had,” said Simmonds. “I didn’t like soccer, and I wasn’t good at it. So two school teachers started what they call the hillwalking conferences (another word for hiking) and that’s when it started. I started hiking as a teenager. And then I’ve carried on mostly, mostly all my life since then hiking in one way or another.”

His journey’s taken him along the West Coast Trail, as far as to Malaysia and Nepal to complete trails there, though he added that doing them alone, as opposed to with his son, was a miserable experience that nearly put him off of his passion.

He then he heard about the Appalachian Trail.

“I’d read a book called Into The Woods, which was about the Appalachian Trail. I thought how cool would that be? Now where it was from the southern point, five months of hiking, and I thought that was really cool,” said Simmonds. “So that popped back in my head like eight years later and I thought ‘I think I would like to do that.’”

It was not to be, however, as his family talked him out of the trip at the kitchen table, unwilling to let him quit his job in order to vanish down the trail for months at a time. However, after some time passed, fate would find him picking a longer, more difficult trail in the CDT.

The CDT begins in New Mexico, and stretches all the way to the border of Montana and Alberta, and not only was Simmonds going to hike it, he was determined to put the entire thing on YouTube, as a way to give back to the through-hiking community from where he had learned so much.

“YouTube is where I learned everything, at least about this particular hike. I watched every YouTube video on the CDT and between what I have learned before like just hiking on my own and watching those videos. That’s how I realized that all the gear that I’d had wasn’t going to work because the year I have is for what you could call conventional backpacking, which is maybe go away for five days or even three weeks. That’s not quite the same as going for months on end,” said Simmonds.

While on the trail, Simmonds was walking 20 miles or more each day, and often would go days without seeing any civilization, thanks to the remote nature of the path. He would often only enter towns to re-stock on food, camping out most nights and relying on various water-stops that had been put along the trail by other hikers and “trail angels,” or volunteers who had their numbers placed at waypoints for those in need of assistance.

The CTD is full of alternative trails, in the case of closures due to weather or forest fire, and most hikers keep track of their progress via a phone app, which uses GPS to help them stay oriented… which Simmonds only realized would still work without cell service once significantly into the trail, thanks to a fellow hiker.

“I was walking around 500 miles over 500 miles a month,” said Simmonds, who added that he went through 5 pairs of shoes, only the last of which didn’t give him blisters from the sheer distance and amount of friction every day.

Simmonds began the trail as a “no-bo,” or northbound hiker, on April 28th, with the idea that he would make his way up to the end of the trail in Waterton, AB, and have his loved ones pick him up from there. This, however, didn’t actually pan out.

“We got as far as nearly to the border between Mexico and Colorado,” said Simmonds, who had picked up a hiking companion along the way. “US Forestry Service had been doing a controlled burn, which hadn’t gone as good as they expected. They shut down the whole 250 miles, and the alternative route had far too much snow.”

This left them about three weeks too early to continue, and it wasn’t financially feasible to wait for three weeks, which left only one other option in his mind; to head back home, companion in tow, and continue when the time is right from the northern end, heading south.

The trip took 150 days in total, combining the north and south bound stints, every day of which can be seen through his videos on YouTube under the channel AndyHikes, where he catalogues many nights of cowboy camping, of living off of primarily instant meal packets and Mars Bars, as he joked at his talk at Redcliff Library, and the many trails and wonders to be seen along the CDT.

“I would absolutely do it again,” said Simmonds.