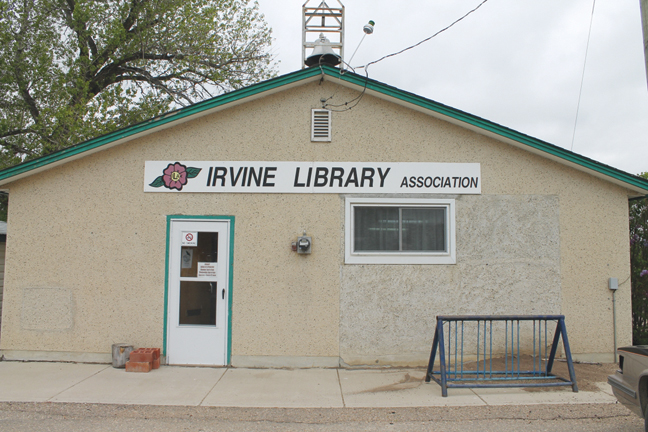 The planned building of the new Irvine Library and community centre has left county officials and residents alike with much more on their minds than what books will be at home within the updated shelves.

While residents are excited for the consideration in development and the promise of new infrastructure, the selected location of the building — the current Woodward Memorial Park — has left some residents concerned and dismayed, said Marina Cole, longtime resident of Irvine.

“None of us were against the library having this; we want this; we want growth in our community; we just don’t want it in our Memorial Park,” explainedd Cole.

She explained many residents feel that there’s been a breakdown of communication between themselves and Council and that many of their concerns, including a petition that had been signed by many of Irvine locals, have not been taken into consideration.

“There is a petition that, from what I can gather, was texted to a counselor,” said Rooney. “But that means it wasn’t actually ever physically submitted to the County, so it wasn’t the petition that the County could act on, at that point.”

Cole had not been informed that the petition was non-actionable when it was sent, which she added has caused heartache in the community, as many were counting on this as a method to make their voices heard.

“I’m not great with politics and stuff, but no matter what, if it is a letter with 75 members, which is I think is close to a third. In the end, there ended up being 109 signatures on that petition, but there would be 307 people at the time that live in this community, but it being a third of the residents and it should still have been considered,” said Cole.

She suggested that County council may have come to believe that the project has been well-received, when it has not, even if some concerns have not been made known via official channels.

Currently, the County has put out a call for a delegation request, so that residents who would be affected by the decision can have their voices heard via the official channels, said Rooney, in a way that Council can properly respond.

“I don’t think that was ever in question. That was always the case with any issue with council: you can always make a request to be heard by council at an official council meeting,” said Rooney.

He added that there has been some pieces of misinformation that have been circulating surrounding the location chosen.

“The park itself isn’t being torn down,” noted Rooney. “There was some confusion early on. People thought that, ‘oh, we’re just gonna pave (it over). The plan for the site obviously includes a playground to be rebuilt on it. Some people even attach the word ‘future’ to that and take it to mean they’re not going to do it. It’s part of the plan. It’s just not the first thing that gets built on it.”

The exact reason that the space was selected could not be shared at this time, Rooney surmized it’s believed to be due to the central downtown location of the park, in order to encourage traffic to the area.

This traffic will be part of the problem, however, said resident Sue Moss-Townsend, who expressed concern about a lack of parking space and how car congestion will affect those who live close to the site, as there’s minimal room for any kind of parking accommodation, as well as the positioning of the park facing the potential hazards for young children. These hazards include railroad tracks and the main road (South Railway Avenue).

The plan also includes a new Lions Park to be created elsewhere in Irvine. However, the present Lions Club is reluctant to give up the space they’ve been maintaining all these years, said Cole. She added that this fact was part of what has created much of the current debate, following a member of the club speaking on behalf of himself and not the collective, to county.

“The Lions Club, as a group, had also put in a notice of concern, a note, with all of them signing it saying they did not want it in that park,” said Cole. “They also had signed a petition as well, but they did not want it in that park as well. When it came out that they were saying the Lions Club was happy, it was when we started pushing back hard again, and started going to the media and that because there were so many things that just ended up snowballing.”

Another point of issue is the trees that are on the property, the idea of removing them, especially the nearly 100 year-old poplars distressing to many residents. Rooney explained an arborist had done a report explaining many of the trees were experiencing trunk-rot, save for the two poplars in the centre of the property, though one is recommended for removal.

Cole, however, expressed concern for the remaining tree becoming dangerous, due to the intertwined nature of the canopies, as well as the loss of history associated with the trees and the potential for habitat trees for wildlife.

Where both sides certainly agree is in the desire for the development, but with the break-down in communication and the project continuing despite the aforementioned concerns, many residents are finding it difficult to trust the county, said Cole.

“That’s where that kind of becomes a hard situation: whereas we from the community are saying basically ‘anywhere else, but the park because we can have something where we can keep our only green space on this side of town,’” said Cole, who recommended other land up near the arena and Irvine School.

“The main problem is that, as a community, we should have transparency,” said Cole. “Even when it came to the choices on where the library should have gone, rather than saying that it’s going to be in your Memorial Park, as it was said, when we were at that meeting, and if there’s too much pushback that we’re going to pull the project, they should have never come into that meeting with the public with preconceived ideas and where it was supposed to go. It was supposed to be a public meeting, and it was supposed to be to listen to the public and their concerns. It was very well preconceived (by the County) by the time they had come into it.”

“The good news is that, you know, everybody is starting to move forward, and it might not have been pretty, but I think we’re gonna get there,” said Rooney. “Whatever there is… we don’t know yet. Everybody’s job now is to take a step back and try to try to get it sorted out. Even if it wasn’t part of the original process. We still don’t want to make people unhappy over what’s supposed to be an improvement to the hamlet.”

Any delegations will be received at the February 7th Cypress County council meeting. Both parties have expressed hope that this will allow for the matter to have an open, transparent, and actionable dialogue and reach a solution both the county and the residents can be happy with.