Taxes going up for farmers, businesses in Cypress County 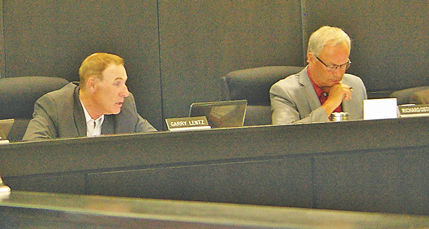 By Tim Kalinowski
Cypress County council approved a revision to the 2015 Budget which will see the mill rate increase on farmland by 1.000 and on non-residential properties by 0.65 in chambers on Tuesday. Council was originally presented two options to go up 1.000 or 2.000 on farmland. Four options to increase the mill rate by 0.25, 0.5, 0.75 or 1.000 on residential properties. And four options to increase the mill rate 0.25, 0.50, 0.75 or 1.000 on non-residential properties. Council had to decide which slate of options was the best mix in Tuesday’s discussion and vote.
The increase of 1.000 on farmland and 0.65 on non-residential properties, while keeping residential rates the same, was seen as an acceptable compromise
by most councillors to help make up for a $2,129,000 operating deficit in this year’s budget. The rate increase passed in a 6-2 vote after some heated discussion.
Ward 6 councillor Dustin Vossler engineered the compromise. He opposed increasing the mill rate on residential property taxes because the increased assessed value of property would already see residential tax increases over five per cent in most areas this year anyway. He pointed out that the mill rate on farmland had not increased since 1985.
“I didn’t want to see any residential go up as it was because it’s just tough times for everybody right now with all these jobs being gone and whatnot,” said Vossler after the vote. “It’s silly to take and move up a residential mill rate while we are in a situation like that. So if we have to hit up the businesses a little bit and the farmers a little bit—I’m a farmer and if I have to pay more, I have to pay more. It’s not going to wreck my bottom line to pay a little bit of extra taxes.”
Ward 4 and Ward 2 councillors Garry Lentz and Darcy Geigle both opposed to the mill rate increase.
Geigle had championed only a 0.5 mill increase in non-residential taxes on top of the 1.000 mill increase on farmland.
Lentz, on the other hand, had strongly advocated for no increase in the mill rate, preferring to find additional revenue to balance the budget through cost cuts instead.
“I think with times the way the are, with the whole financial situation in the province and the county, we have a lot of people who are out of work. I think we should have tightened our belts and not spent so much money in the first place in the budget,” said Lentz.
Reeve Richard Oster voted in favour of the mill rate increases on businesses and farmland. He said the cost of inflation alone justifies some sort of increase, especially since the rate had remained unchanged for so many years. He expected the change in rate to solidify county finances going into the future.
“Times have changed for the County as availability of government grants has decreased, the returns on investments are down, and everything costs more,” explained Oster. “Council’s philosophy has changed as we are thinking in a more strategic manner and looking to the future. That being said, no further increases are planned after this for the next few years.”