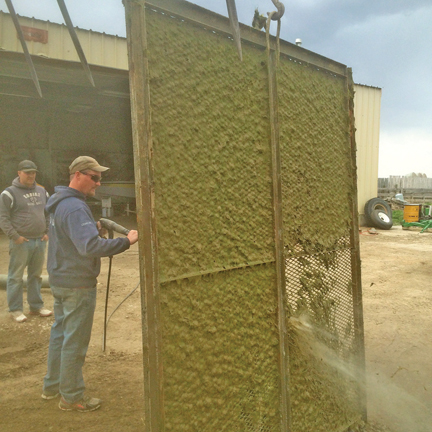 PHOTO SUBMITTED BY GERALD REIMER - Brent Reimer cleans a screen from a canal that provides his farming operation with water for irrigation. An early algae bloom is the cause of the issue that has been forcing farmers to shut down their pivots every few hours to unclog the algae from the screens.

The warm, sunny weather of recent weeks has been causing more than a few headaches for irrigation farmers as an early algae bloom has been causing the screens on the canals to become plugged and forcing the farmer to shut down his pivots.
“We have had algae in the main canal and it has forced us to have to constantly clean the screens,” said Gerald Reimer.
John Crooymans, who also farms in the County of Forty Mile, said the problem has been extensive.
“It’s a huge problem this year and it’s something that has progressed as they upgraded the canals,” said Crooymans. “The sides used to have grass, now they are rocks. Once everything was upgraded, we had cleaner water flowing through and more sunshine getting into the water, allowing the algae to grow and it grows like a weed.”
Crooymans uses self-cleaning screens, but has to still use pumps to get rid of the algae.
“In my situation, the algae has nowhere to go. We were shutting things off every three to four hours to get rid of the algae, but (the other day) we were able to run it for 10 hours without shutting it off,” said Crooymans.
Gerard Oosterhuis, a director for St. Mary’s River Irrigation District said the algae has been a major concern for irrigators in the region.
“The main problem is the clear, sunny, warm weather we have been getting,” said Oosterhuis. “It is really been running rampant and it is mainly new algae with some old algae.”
SMRID will be treating the canal system with magnacide to get rid of the algae.
“A combination of high demand and the warm sunny weather is what has caused it. Farmers are getting frustrated because they are constantly screening and filtering to sort out that algae,” said Oosterhuis. “This year’s algae bloom is unprecedented and SMRID is with it. Magnacide is a limited resource and we have to use it wisely.”