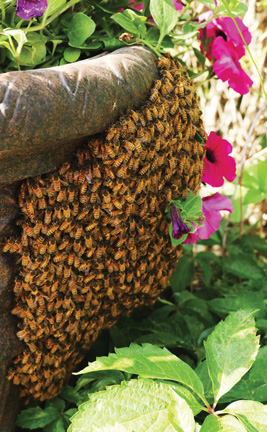 Tens of thousands of bees took up temporary residence on the side of this flowerpot at a Bow Island business last week, requiring the expertise of a beekeeper to get them safely relocated.

By Jamie Rieger
Whitla beekeeper, Colin Engel came to the rescue when thousands of bees became attached to a flower pot at a Bow Island business last week.
According to Engel, between 50,000 and 60,000 bees were attached to the flower pot when he arrived to vacuum the bees into a box to take back to his apiary.
“This saves the bees because people aren’t spraying them, which kills  the worker bees and it keeps them from going places they shouldn’t be,” said Engel, adding that people should not be using household vacuum cleaners themselves to eradicate a swarm of bees.
When Engel got to the swarm he said the busy bees were in the process of searching for a more permanent residence.
“They will find a staging point where they will cluster around the Queen. They will send out scouts to find a new home,” said Engel. “When they find a place that could be a new home, they do what is called a waggle dance. Other scouts will go to other places and do the same thing. When they get a consensus, call it honeybee democracy, they vote and will go to the one with the most votes.”
“We caught these ones in the process of looking for a new home. Some were still full of honey when we got them,”
Engel said once he got them back to the apiary, he was going to give them something to eat so they don’t fly away again.
Engel said this group of bees witll provide him with between 50-60 pounds of honey this fall.
Engel and his wife, Valerie started looking for bees to keep about three years ago, something he has always wanted to do.
“We got some the first year, but did not have a lot of success. The next year, we bought two packages of bees from Scandia Honey. We had two good-sized hives. Now, we have over 10 hives, but we want to get up to 25 hives,” he said.
Engel said disease has taken a huge toll on the bee population in recent years.
“Varroa mite has been decimating a lot of hives. These mites are a feat of evolution because they appear invisible to the bees,” he said. “What blood-sucking creatures they are and what a feat of engineering.”