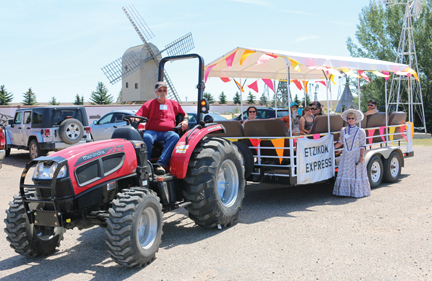 Gary Hobbs (in the driver's seat) built the Etzikom Express to transport guests at the Etzikom Centennial to all the activities that took place over the weekend. His wife, Raylene, is dressed in vintage garb, standing beside the sign.

By Jamie Rieger
After months of planning and preparing, it was time for the C’mon Home Centennial in Etzikom over the weekend and the organizers did a tremendous job in getting the little community ready for the hundreds of guests who traveled from far and near to take part in the celebration.
“The homecoming is awesome, the people who worked hard on it are awesome, the people are awesome, and I really think it was our C’mon Home theme that got things going,” said Len Mitzel, co-chair of the Etzikom Centennial committee.
The committee did everything to ensure guests would be well-entertained and comfortable for the weekend’s festivities.
Saturday morning had a fun run, a regular event during the month of June in Etzikom and despite the hot weather, dozens of participants cycled, ran, walked, and roller-bladed their way through the five-kilometer course.
Lots of activities and displays were scattered throughout the tidy community, including a Show and Shine with close to 50 vintage cars and trucks lined up along the street for all to admire. The Cypress Rod and Custom Club out of Medicine Hat had several unique vehicles on display.
Just around the corner was a display of antique tractors and agriculture equipment from yesteryear.
The younger generation had lots to do, as well, with basketball hoops set up and bouncy castles, miniature train rides, and face painting in the park. By mid-afternoon however, when the temperatures were hovering in the high 30s Celsius range, the big, bouncy castles and obstacle courses proved to be too hot for the young ones.
A slide-show presentation of vintage photographs took place in the community hall and provided a nice, cool place to get out of the sun for a bit and relax while viewing images of Etzikom’s early residents.
A quilt and art show dedicated to the memories of Bernice Harty and Mary Jane Piotrowski was elegantly displayed in another building.
Seen amongst the crowds of people were a number of men sporting full beards that they had been growing out for the beard growing contest. The winner of the contest, as well as the fun run were announced following the supper for registered guests later in the day.
It was no accident that the Etzikom Museum of Southeast Alberta and Historic Windmill Centre celebrated its 25th anniversary at the same time as the Centennial.
“The museum had its official opening during the Etzikom 75th anniversary so it seemed fitting that we celebrate our 25th at the Centennial,” said Mitzel. “The museum has changed over 25 years and we owe a bit of the impetus to Bill Peters who was born south of here and would be about 100 years old now. We owe a good deal also to the people involved with the museum.”
Other events included ball games at the diamond at the north end of town, jam sessions in the beer garden, and live music throughout the evening, which closed out with a fireworks display at 11:00 p.m.