Change of command at Suffield 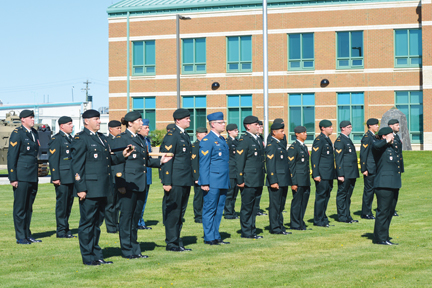 By Tim Kalinowski
On a beautiful cool morning on the rich green grass of the CFB Suffield central lawn a bi-yearly ritual took place last Thursday. The official change of command ceremony for the base saw the final day of outgoing commander Lt. Col. Sean Hackett and the first one of his replacement Lt. Col. John Scott.
Military ceremony has a comforting continuity to it which displays the proud lineage and history of the Canadian Armed Forces. The ranks of soldiers standing in dress uniforms at attention. The march past. The salute. The ceremonial inspection by the highest ranking officer present, or the most distinguished VIP. CFB Suffield has seen its share of all these things over the decades, and on Thursday was witness to it again.
Col. S.M. Lacroix, a former Royal Canadian Armoured Corps officer appointed as commander of the 3rd Canadian Division Support Group, (which includes CFB Suffield), this March, came down to oversee the change of command ceremony. Lacroix noted it was only his second time visiting Suffield; although his previous visit was under slightly different circumstances.
“My first time was in a tank,” joked Lacroix. “And I had a bit more of an impact, I thought.”
Lacroix then spoke of his “personal friend,” outgoing base commander Lt. Col. Sean Hackett. Lacroix noted Hackett had built up a reputation at CFB Suffield as someone who never moves too hastily when making command decisions, but who always gets results in the end. He went on to say he had no doubts the base was being left better off now then when Hackett first took command two years ago.
“Thank you for you two years of service to CFB Suffield,” said Lacroix in closing.
Lacroix then turned to the new base commander Lt. Col. John Scott.
“I think you are probably starting to realize what lies ahead; what privilege you get by being the king of Suffield for the next two years,” joked Lacroix.
And then on a more serious note, he went on to say had no doubt Scott would continue Hackett’s level of excellence in the years to come.
“You are ideally suited for the tasks, the problems and the challenges that you will be facing in the next couple years. You are well-equipped to keep moving the yardsticks on key files.”
Lt. Col. Hackett used his own time at the mic to thank his family for their ongoing support and enthusiasm when coming “into a base that is probably as close to a frontier command as one can find in a modern, home station army.”
He then spoke fondly of all the relationships he had built up and enjoyed in his past two years as base commander.
“It has been a distinct privilege to serve as the commander for such a diverse, complex and strategic Canadian Armed Forces base during such a transformational period,” said Hackett. “Time has a tendency to accelerate toward departure. Reflections overlap with multiple farewells and many forms. Suffice to say with the opportunity to command comes growth. I leave a far better officer and leader for having served all of you.”
The final speaker of the day was incoming base commander Lt. Col. John Scott. Scott spoke humourously of the contrast between himself, a career logistics officer with a record of supply management excellence both at home and abroad, and Hackett, a former paratrooper and winner of the U.S. Bronze Star for services rendered to the U.S. Army during the Afghanistan War.
“It’s kind of apples and oranges between myself and Sean. Understanding that he was jumping out of airplanes while I was counting socks,” joked Scott.
However, Scott went on to say there was definitely one thing he and Hackett shared in common.
“I would say there is a common thread between us, and it’s important. It’s a passion for making a difference.”