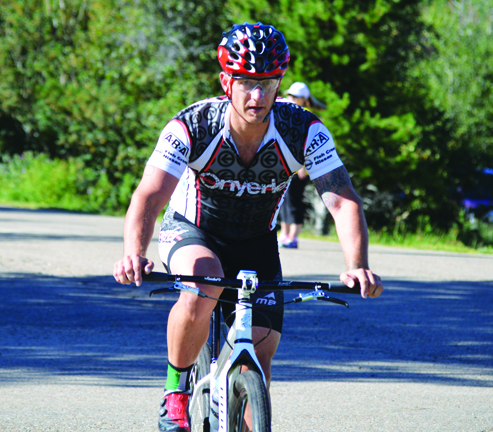 This weekend in Elkwater the scene was set for a shown of epic proportions as over 100 competitors of all ages descended on Elkwater for the annual Elkwater Milehigh Tri. The gruelling event had competitors swim half-way out onto the lake and back followed by a challenging mountain bike race, and finished on absolutely killer run up the side of Old Baldy.
Of the 100 who came out on Saturday about half ran the race in teams, with each member taking one leg, and the other half did all three legs. Medicine Hat’s Matt Ward was the first triathlete to cross the finish line to take the men’s and overall title. It was his fifth time competing in the Milehigh Tri but only his first victory.
“First I have to thank my brother Clay for not showing up this year.” joked Ward. Clay was last year’s winner and a perpetual favourite to win the race.
Ward definitely noticed how much tougher the course was this year.
“The lake swim was good. I liked the bike. It was really fun this year with some new trails built by the 670 Collective that were really good. The run was hard, to say the last. Up a couple of the hills I definitely walked.”
Ward said his family was grateful for the ongoing support of the Elkwater community and the park which allow for such a great race every year.
“We got into this as a family probably 10 years ago now. My dad (Jack) started this race up and it’s been going strong and getting more support every year. It’s turned into a real great event.”
Sarah Robbins was the top female triathlete at this year’s Milehigh Tri. It was the second year in a row the Saskatoon native has won the event. She said it was the community support and spirit she feels in Elkwater which keeps her coming back year after year.
“There is like a million people out there cheering, and the volunteers are just great! I started racing back in the mid-1990s. I really liked these off-road triathlons because it’s really back to the roots of where triathlon used to be. When I first started road triathlons 25 years ago it was very grassroots with lots of really fun, community support. Off-road triathlons are back like that again,” said Robbins.
Ten year-old Amy Leithead also took part in the event as part of a team with her older sister and father. Amy ran an amazing race to finish, beating many of the adults who took part.
“It was a hard race,” said an out-of-breath Leithead just after crossing the finish line. “I just did run. My sister did the swim, and my dad did the bike.”
Marlene Bockman of the Elkwater Community Association was one of over 100 volunteers helping out at the race. She was serving burgers to hungry competitors at the finish line. She said the community always looked forward to hosting the event each year.
“It gives us great pleasure to help host this actually,” said a smiling Bockman. “We’re serving the public and doing something good for our community. (The race) is exciting to watch for everybody.”
Race day coordinator Dave Craipley said the Elkwater Milehigh Tri would not exist without the dedication and support of local volunteers.
“The triathlon is part of the community out here, and we have great support from the park. We have over 100 hundred volunteers. This race is based on family and it’s based on fun.”