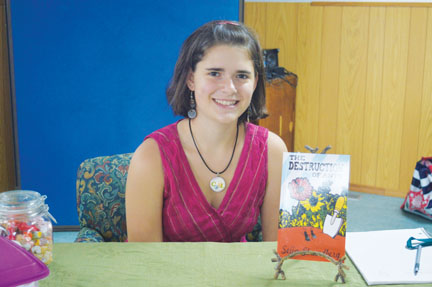 By Tim Kalonowski
At this time of year homeowners look to their garden for the bounty it gives. Most of the vegetables are now, or soon will be, picked. After that the garden must be prepared for the winter dormancy months with tilling and pruning. During the summer the garden is a world of lush green which supports numerous crawly creatures. Did you ever think when the garden is finished its cycle, it is also the end that lush world for our other than human neighbours? Thirteen year-old Seiji Strandberg from Seven Persons has thought about it. In fact she has thought about it so much she has recently published a children’s book on it entitled “The Destruction of Ants” to make others think about it too.
Last Saturday she officially launched her literary career with a book signing at the Seven Persons Grain Elevator and Gallery. Before the signing, Strandberg took the time to speak with the Courier about how she came to write it.
“I had to do a writing assignment for school,” explains Strandberg. “I wanted to do a creative story and you don’t really hear much about two worlds. The human side and the bug side together; so I just wanted to do a little of that.”
Strandberg is home schooled by her mother on their family farm. She says when she began doing her writing assignment the entire story just sort of came out in a big rush. It took her two months to refine that initial creative outpouring into a book she was happy with. During that time she also got in touch with Guardians books who told her they wanted to publish it. The rest just sort of came together after that.
Strandberg said she really had no theme coming in, but she wanted to tell a different kind of story about bugs than one normally sees in children’s literature.
“You always hear kids stories about bugs and ants that are good and sugar-coated. So I just wanted to make something that was different and not really heard of,” says Strandberg.
The main character is a girl named Anna and on the critter side there are the ants. The ants are attempting to gather food for winter while Anna is out preparing her garden and yard. It is the collision of these two worlds which creates the story.
“For Anna it’s not like it’s really big for her,” explains Strandberg, “but for the ants it is destroying their lives.”
Since publishing her book, Strandberg says she has had a lot of great encouragement from her friends, family and neighbours who have all been spreading the word for her. She also enjoyed the process of getting the book together so much that she would not rule out writing another one in the future.
“I found it very interesting to write and very exciting and something new to look forward to,” says Strandberg.
Those interested in obtaining a copy of “The Destruction of Ants” can go online at amazon.ca or make a request through Strandberg’s Facebook page. The book is recommended for kids Grade 2 and up.