Group blames county for lack of water to park trees 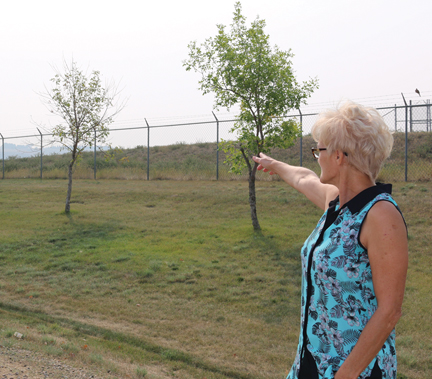 Marilyn Henderson, a member of the Last Resort, a social group at Forty Mile Park, says a number of trees began dropping their leaves in July.

By Jamie Rieger
Extremely dry conditions have had some leaseholders at Forty Mile Park asking, “Where’s the water?”
Several members of the Last Resort, a group of long-term leaseholders at the park, have concerns that the County of Forty Mile has not been doing enough to care for the grass and trees located in public areas this summer.
“We have so many issues, but this is about not having enough water to care for the park. The leaves started going white in July because of a lack of moisture,”  said Marilyn Henderson. “Some places in the park have not been watered in three years. What if there is a fire? What’s going to happen? We don’t even have a water truck any more.”
Henderson and fellow leaseholder, Ron Hunt both indicated that there are many broken driplines and accused the county of not wanting to spend money on water or repairs.
County council went in camera during their Aug. 26 meeting to discuss the issue prior to addressing it with local media. After coming out of the in-camera discussion, councilor Craig Widmer, who sits on the park committee, said they are allotted 60 acre feet of water for use at the park and were nearing their limit.
“We are getting individual people who are not watching their water usage. This comes out of our water allotment and we are in a drought situation,” said Widmer.
Widmer also indicated that the soil at the park is not the best for water retention and that may be contributing to the problem.
Reeve Bryne Lengyel suggested that water restrictions could be imposed if conditions do not improve.
“Trees are our Number One priority and we did have a problem with disease,” said Widmer.
Henderson told the Commentator that the leaves on many trees started turning white in July.
Casey Kallenberger, from Arbor Care Tree Service in Calgary, a company that employs one of only a dozen master arborists in the country, said she was not familiar with any widespread tree diseases this year other than seeing an increase in aphids and fewer spider mites.
“We are seeing trees with heat stress, so it’s important to give the trees some water and fertilizer and pruning may be necessary,” she said.
Agricultural fieldman for the county, Dave Matz said he has noticed trees suffering from Bronze Leaf disease in the county.
“Bronze leaf disease went through central Alberta three years ago. It is a disease that affects trees that are drought or heat stressed. The leaves can fall off. I have been seeing signs of it all the way to Lethbridge,” said Matz.
Bronze leaf disease is a fungus that infects poplar species, including trembling aspen, Swedish columnar aspen, and tower poplar. BLD can kill an infected tree within three to five years of initial infection.
Kallenberger said early detection and treatment is vital, but there is no chemical control for the disease. Diseased leaves will first appear on the lower crown, but may be scattered throughout the tree. While Henderson indicated leaves on trees at the park turned white in July, the leaves of a tree infected with BLD will become dark reddish-brown or bronze. Trees infected with BLD will need to be pruned eight to 12 inches below the sign of infection.
Kallenberger said that without seeing the white leaves in July, she was unable to determine what the cause could have been.
The concerned leaseholders and the county do agree on one thing, that the trees at the park are a top priority.
County councilor, Gerald Reimer whose division includes Forty Mile Park, visits the park on a regular basis.
“The county purchased 60 acre feet from SMRID and we are currently at 62 or 63. The trees need a good soaking in the fall for over the winter months. Right now, we have to save the trees,” said Reimer, adding that because of the drought conditions, everybody should be conserving water.
Developing new areas while there are repairs needed to driplines and other upkeep needed, also concerned Henderson and Hunt.
“There are water breaks from two years ago, They don’t want to spend money on water, and yet, they keep developing,” said Henderson. “The main thing is we need to save the trees. Without any kind of moisture, these trees are not going to make it.”
“We never see any of them from the park committee at our meetings,”
Reimer noted that over the past several years, precipitation had been plentiful and development has been part of the long-term planning for the park.
“For the past three or four years, we have had lots of water and were able to go forward with development that includes underground sprinklers at all new sites,” he said.
Moving forward, the county will be monitoring the trees and looking at other options.
“There will be more monitoring of where the water is being used and there is the possibility of getting more water as the park grows and the trees grow and require more.”