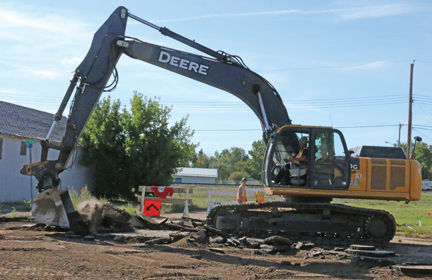 Wally Portelance, a foreman with MJB Enterprises, operates the high hoe to rip up the pavement at the intersection of Fifth Avenue and 1st Street East in Bow Island.

By Jamie Rieger
The work on replacing the water and sewer lines on 5th Avenue East in Bow Island started last Tuesday and is expected to take several weeks to complete, according to the project’s engineer.
Dave Lesko, from MPE Engineering said they expected the project to be completed in four to six weeks, weather permitting, and have run into few issues so far.
“There has been a few water leaks, but that’s about it so far,” said Lesko, adding that adjacent property owners would be getting water piped in for about a week to two weeks until the main line is back up and running.
The project, which includes redoing the water and sewer system to the property lines, sidewalk repairs, and a full road rebuild, as well as water and sewer lines to the Bow Island Legion and Golden Age Centre, is being funded through MSI (Municipal Sustainability Initiative), Federal Gas Tax Fund, and Town reserves. The total cost of the project is $868,545.
The work is being completed by MJB Enterprises.