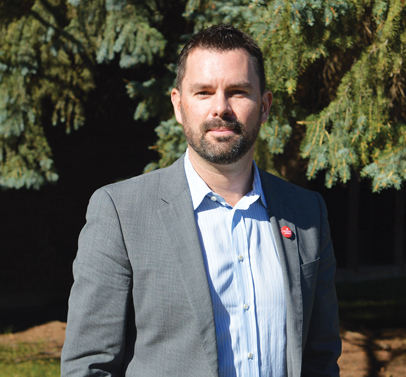 Jeff Gaulin from the Canadian Association of Petroleum Producers does not foresee a huge upswing in the industry next year, but predicts more layoffs and companies trying to stay afloat.

By Tim Kalinowski
Jeff Gaulin, Vice President Communication with the Canadian Association of Petroleum Producers, was in Medicine Hat on Monday to communicate with the public and local media about some of the challenges facing the oil and gas industry in the year ahead and some the CAPP’s concerns with current government policy in Alberta.
“The challenge we’ve got is two-fold,” explained Gaulin in an exclusive conversation with the Medicine Hat News, Prairie Post and Bow Island Commentator. “One, we don’t have the transportation capacity over the long term to develop the resources, and we also have to challenge ourselves in how competitive we are in terms of developing them. We have seen our competitive position in North America eroded over the last ten years with development of oil and gas plays in the United States. Alberta’s share of all the capital investment in North America has dropped in half. It used to be 35 per cent of all the capital investment in oil used to come to Alberta. It’s now down to 17 per cent.”
“Add on top of that the low prices the disruptions we’ve got and there is a lot of uncertainty in terms of policy at both the national level and here in Alberta with a number of policies coming forward such as a potential review of the Alberta Energy Regulator, the Royalty Panel review, the climate review. All of those add elements of uncertainty of the cost to us. We have felt that off the bat with the doubling of the carbon charge, and we have seen that with the corporate tax increase. Those two policies alone have cost our industry a billion dollars.”
Gaulin was then asked if industry does not bear much of the responsibility for its own troubled state due to over-drilling, pricing wars between oil producing countries like Saudi Arabia and the United States, and unsustainable cost increases in its operations over the past ten years. Was it fair to put all his industry’s troubles at the government’s feet? Gaulin acknowledged there was some aspects where industry has hurt its own position.
“When I look at the challenge we’ve got; we’ve got a high cost base,” confirmed Gaulin. “And part of that is driven by industry, for sure. But as we try to seize on opportunities to develop the resources to increase Canada’s and Alberta’s share around the world, obviously we increased our costs over the past ten years. But when you begin to look at how competitive we are within Canada as an industry, and with other industries around the world, you have to recognize we compete for capital, for talent, for technology and transportation to get our product to market, we have to challenge ourselves, collectively, how are we going to do that better going forward?
“And it can’t be just a simple case of let’s raise royalties and take more. Or double the price of carbon in Alberta. And that’s going to solve both our carbon issue and our market access issue, because it won’t.”
Gaulin went on to say that it was the collective responsibility of industry, government and Albertans to have these discussions about how to be more competitive in the future and increase market access for Alberta oil.
“We are less competitive and profitable than we were ten years ago. And when we look at the world stage, we better get our act together or we will be priced out of the market… Canada, specifically Alberta, has got a tremendous, if not unparalleled, opportunity to develop oil and gas resources. We are the third largest proven oil reserves in the world, larger than places like Iran, Iraq or Kuwait. And yet we produce less than four per cent of the world’s market share.”
Gaulin said that means more pipelines need to be built and government needs to put in a greater effort to promote Alberta and Canadian oil markets overseas.
“If we are to achieve that growth we’ll need more pipelines. Rails give us a little bit of flexibility in the near term, but we are talking a few hundred thousand barrels. We’re not talking nearly two million barrels more per day than we have today we are expecting in the next ten years. Are they required tomorrow? No. But as we are looking at continuing to grow over the next two decades they will be.”
Gaulin also addressed the issue of the potential for more refineries in Canada.
“Just over half of Alberta’s oil is already upgraded in province,” said Gaulin. “The challenge we’ve got is this: There is tremendous slack capacity in North America for heavy oil upgraders and refineries. In a market like that who puts their money to build something more when you’ve got slack capacity? Or can you ship it somewhere, get it refined, and ship back at a far cheaper cost? If there was the rate of return to invest in a private upgrader, I imagine somebody would be doing it.”
Overall Gaulin said the year ahead is looking fairly bleak for the Canadian petroleum industry, but there was also the potential to use this down period to address long term issues of competitiveness and sustainable growth.
“There will be a lot of mergers, acquisition and bankruptcy activity over the coming months,” predicted Gaulin. “We have seen 36,000 people in our industry laid off to date. I anticipate there will be more every day. It is an extremely trying time. But we have an opportunity to make things right. Maybe this is part of the big public conversation among Albertans, the government and the industry. Maybe a lot of these things that have been hanging over the industry we can do a better job on.”