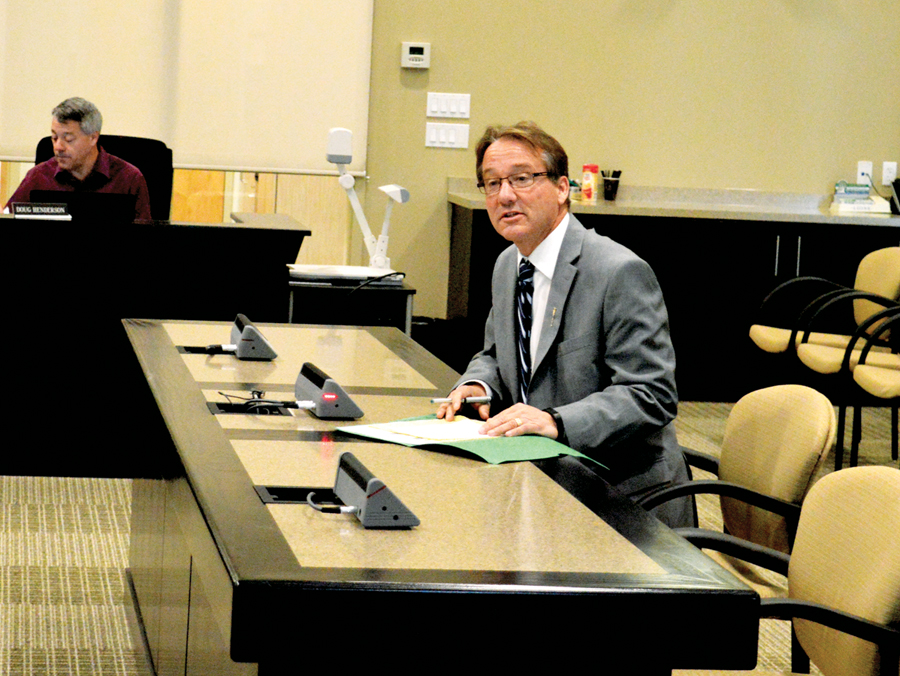 By Tim Kalinowski
Cypress-Medicine Hat MLA Drew Barnes announced at last Tuesday’s Cypress County council meeting that the provincial government had opted to review and delay construction on the highly anticipated Schuler School build. The government cited “partnership complexities” as the reason for the delay, an explanation which left many scratching their heads among councillors, and drew an audible groan of frustration from the usually staid Coun. Art Squire who represents Schuler.
An official announcement later in the day confirmed what Barnes had told council.
While Barnes conceded the Wildrose Party had also called for school building and public infrastructure review during the last election, Barnes said the timing of the NDP government’s announcement stinks.
“Here they are with a huge broken promise, and I would suggest there is an opportunity to build these projects and get more value for the taxpayer,” said Barnes. “There is a slow down in private investment right now. This is a good time to build those things. It is an important project and I will fight for them to get this high on the infrastructure priority list and get this school built.”
Barnes acknowledged the effort of the local people in Schuler, and the one million dollar donation from the Drowning Ford Grazing Association, to push this much needed school project forward.
“I am disappointed it is not going forward,” confirmed Barnes. “Local grazing associations and local people in the Schuler area were contributing substantially.”
Coun. Art Squire said he hoped the delay did not go on too long.
“People in Schuler will be disappointed, but, on the other hand, it’s not cancelled just delayed,” said Squire. “It definitely shouldn’t be delayed. But I don’t think it will make any difference for the time being unless the school that’s there becomes unusable. And it’s very close to that.”
Stuart Angle, Prairie Rose School Division board chair, added some more details to the government’s “partnership complexities” comment.
The reason he has been told for the review, explained Angle, is when the tender for construction of the school was awarded to Amron Construction Ltd., which had the lowest bid, it was above what the government had initially budgeted for the Schuler School project.
“We’ve just got to work through this part,” said Angle. “Once they resolve the difference between the tender and their estimate then it can start. They are saying instead of opening next September it’s looking more like January the year after.”
Angle asked citizens in Schuler not to be too discouraged with the delay.
“Be patient. We’re there. It’s in process. It will happen. It’s just a question of when,” Angle said.
The original budget for the construction of the new Schuler School was $4 million. Drowning Ford Grazing Association donated another million to bring the total project budget to $5 million. Amron Construction’s bid was $6,048,027.