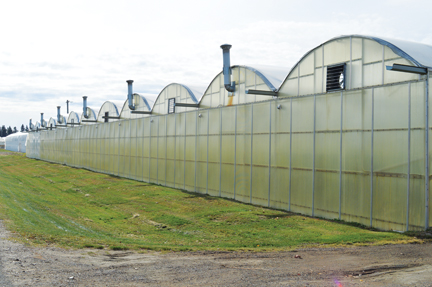 The Redcliff/Medicine Hat area is home to the largest dedicated greenhouse industry in the province; but some long-established greenhouses are finding themselves struggling under current market conditions.

By Tim Kalinowski
Last week the government of Alberta released its annual greenhouse report. The report, which takes into account numbers from 2010-2014, laid out a picture of a greenhouse industry which is struggling to cope with a shortage of labour, a decreasing Canadian dollar, competition from external to Canada imports, high energy costs and increasing taxes.
The report shows the biggest increase in greenhouse land area took place in Medicine Hat and Redcliff between 2010 and 2014 while greenhouse operations shrunk marginally elsewhere in the province.
Doyle Brant, acting GM of Red Hat Co-op, says the report accurately reflects what he has been seeing on the ground with some minor qualifications.
“Our vegetable industry hasn’t shrunk. I am not saying it is not going to. There are challenges because of costs rising and produce prices not changing. Our margins are shrinking, and that makes it more difficult… Even with our incentive program and job retention programs in place, we are really struggling to get new (employees). We just can’t get enough people.”
Brant says municipal taxes and provincial minimum wage increases are also a problem for long term sustainability of the local greenhouse industry.
“Adding a dollar an hour this year and a dollar next year for five years that will be detrimental to our operations, and is even now. If it were right across the board (across Canada and North America) dollar increase an hour  it would be different, but when it’s only Alberta that puts us at a competitive disadvantage. Our taxes also went up significantly last year for the Red Hat Co-op. The mill rate went up and our assessment went up so we got hit two ways. Our greenhouses are agriculture and horticulture, but they are considered commercial in the Town of Redcliff and they pay huge property taxes.”
Brant said Red Hat’s growers are not pushing the panic button yet by any means, but there are definitely serious concerns facing the industry over the next few years.
“We do have our challenges, and it is not getting any easier. We do have some of our small greenhouses up for sale right now and we’re looking for new buyers. So what it is going to look like next year, I don’t know. We are trying to be optimistic.”