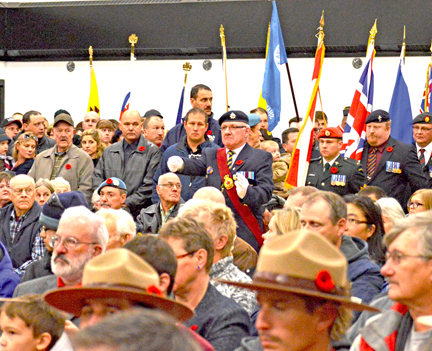 By Tim Kalinowski
Remembrance Day services at Redcliff were very well attended this year with perhaps as many as five hundred people packing the gym at Parkside School and spilling over into the hallway and standing on the stoop outside the gym door. This year the entirety of the service was held at Parkside, including the wreath laying. The Legion explained the decision to do so was out of consideration for the elderly vets who were attending the service. Legion organizers did not want to take a chance that a vet might slip or catch a chill while standing outside in the frosty air at the cenotaph.
Despite this change in protocol, the service was a moving tribute to the current soldiers and the veterans who served in Redcliff and surrounding areas. Medicine Hat College Chaplain Lisa Waites presided the day and gave an uplifting sermon about the importance of love and of commemorating sacrifice in war. She told three moving vignettes from people who served in the Second World War. One was the story of a newlywed seeing her husband off at the train station as he left for the war. The woman staying strong for him, but breaking down shortly after the train left sight only to be comforted by another woman, a complete stranger, who hugged her tight. The second about a rookie tailgunner on a bomber going through his first strafing as his aircraft moved toward target, and being reassured and comforted by his captain who could sense his anxiety. The third story was about a nurse sitting beside a young, badly wounded soldier for hours before he was moved into surgery to have his legs amputated. How years later the nurse received a letter from the young man saying he still thought of her beside him whenever his PTSD would rear up and he would be comforted.
Trumpeter Catherine Scott and Piper Eric Keane provided the musical accompaniment to the moment of silence and the vow of Remembrance. 90 year-old veteran George Hope read out the list of Redcliff’s  war enlistment numbers and dead from the Great War on. When he reached the Second World War he went silent for a moment before saying: “These men I did know.” This personal statement gave the reading of the names much greater poignancy for those in attendance.
After the service concluded the wreath laying began. Staff Sergeant Sean Maxwell laid the wreath on behalf of the Government of Canada, Bill Duncan on behalf of the Government of Alberta, Coun. Eric Solberg on behalf of the Town of Redcliff and Reeve Darcy Geigle on behalf of Cypress County. There were dozens of others laid by both local companies and private individuals.
There was also a strong contingent from BATUS and CFB Suffield present. BATUS performed a helicopter flyby which could clearly be heard even within the Parkside gymnasium and Major Mark Sadler laid a reef on behalf of the British Forces present. Major Hugh Atwell and W/O Dwayne Nunemaker laid a wreath on behalf of the Canadian Army and CFB Suffield.
After the wreath-laying concluded Legion members, local RCMP officers and British and Canadian military service members marched to the Legion Hall for a social hour with the general public.
After the morning service several individuals also wandered over to the Legion Park cenotaph to leave their poppies at the foot of the beautiful stone edifice. 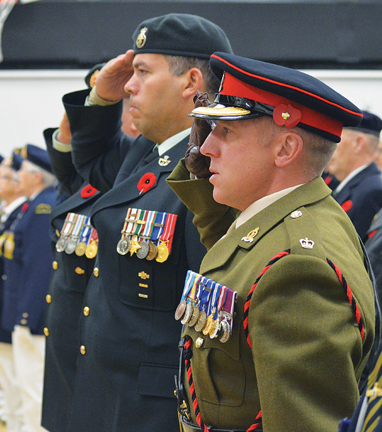 Today’s soldiers honouring those of the past as Major Sadler from BATUS and Major Atwell with the Canadian Forces stationed at CFB Suffield stand side-to side, as Canadian and British soldiers have done on so many battlefields over the past 100 years. 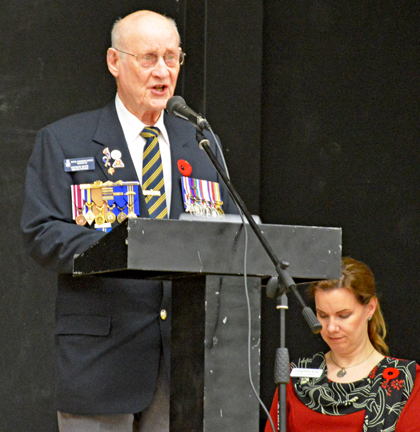 World War 2 veteran George Hope reads out the names of those from the Redcliff area who have died in all of Canada’s wars. 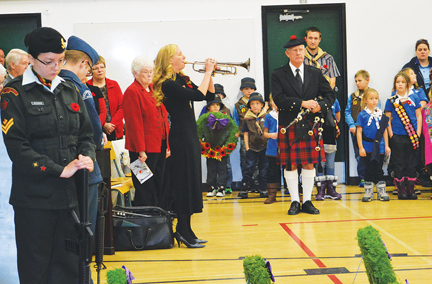