By Tim Kalinowski
The Irvine & District Agricultural Society held its third annual fundraiser dinner and silent auction at the Irvine Sports Complex banquet room on Saturday night. The proceeds from the fundraiser went to support the work the Agricultural Society does to keep the multi-purpose Sports Complex operating in the small community.
Although the numbers were down a little this year Diane Good, a member of the Society, said the event continues to be an important contributor to their annual fundraising efforts.
“Over the past three years we have done really well,” Good emphasized. “However, this year wasn’t quite as good for numbers because it’s a little bit too close to Christmas.  This fundraiser is very important to support (the Agricultural Society’s) work in the community and we have all sorts of people here tonight coming from all sorts of directions.”
Fellow Society member Elaine Lehr echoed Good’s thoughts, but also added there is always a strong emphasis on bringing in quality entertainment to make the dinner a great experience for all who come out; and ultimately contributing to the event’s ongoing success.
“The whole point of this event, besides the fundraiser, is to get people together and have a good time. And to socialize with the rest of the community,” said Lehr.
This year’s featured entertainer was comedian/ ventriloquist Val Hilliker. Hilliker had guests laughing hard throughout the evening with a routine which featured a lot of audience participation and some witty insights into the general human condition. In a sense audience members were really laughing at their own foibles and pratfalls as much as they were at the quips and gags Hilliker employed in her act. Hilliker, who has been a comedy ventriloquist for 38 years, said she used puppets in the beginning to find her own voice before later realizing they could be used to make other people laugh too.
“I was 18 years-old and read a book on how to be a ventriloquist,” remembered Hilliker. “It said: ‘Teach yourself how to be a ventriloquist;’ so I did. I was that typical shy kid and the puppets gave me a voice. I was always a good people watcher, and so now I put (those observations) into my routine. Hopefully tonight people will be laughing so hard they’re crying, and they’ll have to take their glasses off to wipe their tears.”
By that standard, it was certainly mission accomplished in Irvine. 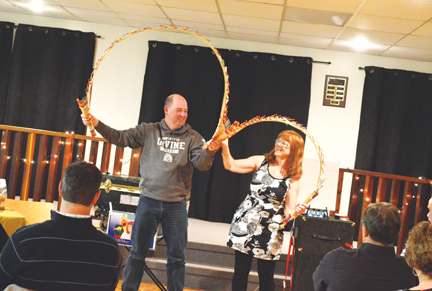