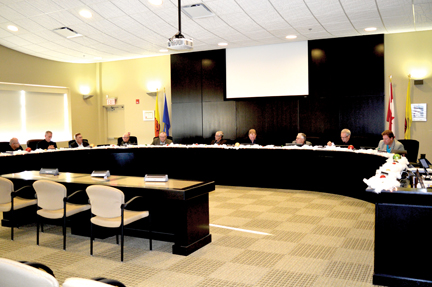 County councilors were informed at last Tuesday's council meeting that the province's linear assessment dollars were a lot lower than expected, pushing the draft budget from an $88,000 surplus to a $400,000 deficit.

By Tim Kalinowski
Cypress County officially passed its 2016 budget at the Dec. 15 council meeting, but councillors were given one last nasty surprise to end 2015.
The Linear Assessment from the provincial government, (which staff had estimated would be about three per cent less than last year when putting together the draft budget for the Dec.1 meeting), turned out to be a lot lower than expected or desired— nine per cent less in fact— which erased a projected $88,000 surplus and replaced it with a $404,000 deficit.
Councillors were presented with three options by the County’s Director of Corporate Services John Belanger to pay off the balance of the deficit: To increase the mill rate to some degree in 2016, cut services to save on costs, or to dip into the Rate Stabilization Fund, which had a large surplus this year due to the fact the County undertook less gravelling and snowplowing than expected.
Belanger recommended the third option, but said it was ultimately council’s decision to make.
Coun. Garry Lentz concurred with Belanger and moved that the deficit be paid from the Rate Stabilization Fund. There was no disagreement on this measure by anyone else on council, but some discussion did arise on adding an additional $100,000 in funding to be set aside specifically for the Irvine Sports Complex. A measure previously discussed at the Nov. 23 meeting and moved as an amendment on the budget vote by Coun. Ernest Mudie last Tuesday.
The idea is the Irvine Sports Complex is now going to be funded separately from other recreation facilities in the county leaving more dollars for the rest in the existing $100,000 annual rec. fund.
Coun. LeRay Pahl was concerned council was prematurely pigeon-holing itself into that $100,000 amount, especially when council intended to ask Belanger to do a comprehensive financial assessment on all the county’s rec. facilities and come up with a long term infrastructure funding plan in the New Year.
“What happens if a $100,000 doesn’t cover it? Why don’t we just leave it open to John (Belanger) gets his assessment done? If that $100,000 doesn’t even come close, where do we get maybe that $500,000 from?”
CAO Doug Henderson weighed in and said it was a question council could take up at a later time if it wanted to. Staff just needed direction on what to include in this current budget, which had to pass before the year ended.
“If you are looking at doing major repairs,” said Henderson. “They are probably not going to happen this year anyhow because council will not be able to react that fast (in terms of budgeting).”
“Clear as mud?” then asked Reeve Darcy Geigle, which drew a few chuckles from councillors. He brought council’s attention back to the motion as presented by Lentz and amended by Mudie to take $505,000 from the Rate Stabilization Fund to pay off the deficit of $404,000,  and to set aside an additional $100,000 specifically for the Irvine Sports Complex. He then called for the vote. The motion passed.
Council then went on to pass the 2016 budget in total unanimously.
Reeve Geigle told the Courier after budget vote the low Linear Assessment being had caught everyone on council, and those among county staff, by surprise.
“It was a little shock on the six per cent difference on the Linear Assessment, but council has the reserves because there was not a lot of snowplowing and gravelling going on this year. John (Belanger) will tell us for sure in January when the numbers are in if that is going to cover us. So this (budget process) is not completely over with, but it looks like our 2016 budget is going to be balanced from our surplus from last year.”
Geigle went on to say the reason that council has always had reserves in place is just for the kind of tough economic situations facing ratepayers this year.
“Now is not time in the economic downturn to be raising any mill rates or adding any new taxes. With the way everything is going, now is not the right time to be digging into peoples’ pockets a little deeper. Over the years we have been pretty diligent on trying to stay out of those reserves as much as we can because (circumstances like) this is why they are there.”