Scammer activity on the rise during tax season 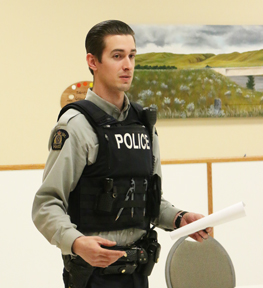 PHOTO BY JAMIE RIEGER - Bow Island/Foremost RCMP Cst. Matt Kennedy listened to a number of accounts of local people receiving phone calls from scammers, particularly from those claiming to be representatives of the Canada Revenue Agency.

By Jamie Rieger
People who attended the Fraud presentation at the recent Bow Island and Burdett District Chamber of Commerce AGM were able to tell their stories about being called, emailed, and visited at the door by scammers looking to steal their money.
Most prevalent in the Bow Island area, and throughout Alberta, is the Canada Revenue Agency telephone scam, which has been around for quite some time, but recently has increased in activity.
“These are often difficult for us to solve because they can come from computers pretty much anywhere in the world,” said Kennedy. “From there, the information can pass through many computers and becomes almost impossible to track.” said Cst. Matt Kennedy, who gave the presentation.
One person in attendance at the session told his story of almost being taken for a large sum of money and had gone so far as to have the first money transfers in the mail when the scammers demanded more money. It was then the local bank, Canada Post, and the RCMP got involved and were able to recover the money in time.
“You were lucky,” Kennedy told the man. “Most people don’t ever see their money again.”
Phone calls about or from long-lost relatives and supposed prizes on the Internet were two other scams Kennedy discussed.
“People have been asked for as much as $10,000. Then, they get asked for more and I have seen it go as high as $200,000,” he said. “They start by asking you for a little information at a time. Eventually, they have enough of your personal information that they can take out a loan in your name and completely wipe you out. They are good at getting information out of you to get the money you have worked all your life to save. Scams start simple and get more elaborate. They will keep getting ore inventive.”
Kennedy offered the following advice, “Always ask others for their opinion…Try to think things through for longer before giving any of your money away…And, people need to report it to us.”
On Feb. 11, RCMP Headquarters in Ottawa issued the following press release:
“The Alberta RCMP continues to receive reports of Albertans being targeted by this scam and would appreciate the media’s help in raising public awareness on this issue in communities throughout the province. Anyone who believes they may have been victimized by this scam or who has given out personal or financial information in error, is advised to contact their local police service and their financial institution.”
Beware of scammers impersonating the Canada Revenue Agency
Ottawa, Ontario -The RCMP and the Canada Revenue Agency (CRA) are warning Canadians about an ongoing scam in which taxpayers across the country receive phone calls or emails from individuals impersonating CRA employees. These people are scammers.
The scammers tell taxpayers that they either owe money to the CRA or have a tax refund. Taxpayers are threatened with arrest or jail time if they do not take immediate action and provide money or personal or financial information.
“The CRA takes these matters very seriously and provides substantial information to Canadians about how to protect themselves from scams undertaken using the CRA’s name. Informing yourself is particularly important during the tax filing season, when such scams peak,” said the Honourable Diane Lebouthillier, Minister of National Revenue. This information, including examples of real scam telephone calls and e-mails, can be easily found on the CRA web site.
“Scammers are always looking for new ways to get your money or your personal information,” warns Assistant Commissioner Todd Shean, who leads the RCMP’s Federal Policing Special Services. “The RCMP works every day to track down fraudsters and bring them to justice, but raising awareness about fraud is also important as it is one of the most effective ways of protecting Canadians from scammers. The more you know about a specific fraud, the less likely you’ll be a victim of that fraud.”
The RCMP plays a crucial role in educating the public about scams, and has a number of programs in place to track fraud, including one run by the Canadian Anti-Fraud Centre (CAFC). The CAFC monitors all types of scams, and warns Canadians to be on the lookout for scammers during the upcoming tax season. The RCMP also works closely with the CRA to raise awareness about tax-related scams.
When CRA employees call taxpayers, they follow established procedures to ensure personal information is protected. To confirm the authenticity of a call, contact the CRA by using its official telephone number for individual tax enquiries: 1-800-959-8281. You can also verify your individual tax account through a secure CRA portal: My Account.
If you believe you may be the victim of fraud or have given personal or financial information in error, contact your local police service and your financial institution.