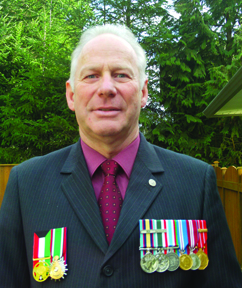 PHOTO COURTESY OF HAROLD DAVIS- Retired air weapons technician Harold Davis is the current president of the Persian Gulf Veterans Association and advocates for the soldiers who are still suffering the effects of the conflict, including Gulf War Syndrome and PTSD, a quarter-century later

By Jamie Rieger
Twenty-five years ago on Sunday, the guns were laid to rest and a ceasefire declared, marking the end of the first Gulf War. Canadian Armed Forces held a number of events over the weekend commemorating the event.
Harold Davis, president of Persian Gulf Veterans of Canada, who spent 31 years as an air weapons technician for the Royal Canadian Navy, was one of 4,000 Canadian troops to serve in the Persian Gulf War.
“Our country called us, we went, did our job, and came home,” said Davis in a telephone interview with the Commentator.
On Aug. 24, 1990, he left Halifax Harbour on the HMCS Athabaskan, one of four ships to be deployed during the conflict. The HMCS Terra Nova and HMCS Athabaskan were deployed, along with supply ship, HMCS Protecteur. The HMCS Huron arrived after the ceasefire.
The deployment came just weeks after Iraqi forces began occupying neighbouring Kuwait on Aug. 2, 1990. A U.S.-led coalition was formed, involving 34 countries, including Canada, making it the largest military alliance since WWII. Canada, in fact, was one of the first countries to condemn the invasion and was quick to join the coalition. It was also the first time since the Korean War that Canada’s military participated in offensive combat operations.
All branches of the Canadian military were involved, primarily offering air and naval support. Canada did also have a hospital regiment on the ground and two infantry squadrons providing security detail.
Naval and aerial bombs started dropping on Jan. 17, 1991 and lasted for the next five weeks. The ground attack began on Feb. 24, driving out the Iraqi army from Kuwait. On Jan. 17, 1991 alone 88,500 lb. of bombs were dropped by the coalition.
For soldiers like Davis, it was the call to duty, a responsibility to complete the task, and the effects of the war still linger in many of the 4,000 who served.
“Twenty-five years today and we are Canada’s forgotten soldiers. We have a lot of medical conditions that have never been addressed and when was the last time you heard anybody talk about Persian Gulf veterans?” said Davis. “We had no idea how long we would be gone. We went, did our job, and came back to a hero’s welcome. The next day we were forgotten about. Yet, for the next 20 years, we had our ships there.”
The Iraqi military set fire to 700 oil wells as they retreated from Kuwait and it is still undetermined how much of an impact that toxic smoke has had on the soldiers.
“With the oil fires, day was night over there,” said Davis. “There are a lot of quality of life issues; PTSD and other ailments. But, there is still Gulf War Syndrome. The U.S does recognize it, but Canada does not. We may not have had any casualties during the war, but we have had lots of casualties since. The U.S. lost quite a few people. By good fortune, we all came home.”
An initial study of Gulf War syndrome, only studied 200 of the 4,000 soldiers who served during the conflict.
“Personally, I am a Gulf War vet and nobody has ever contacted me,” said Davis. “Canada is a great country, but it has a short memory.”
Seven events hosted by the Canadian Armed Forces were held across the country over the weekend. 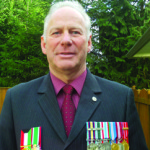 PHOTO COURTESY OF HAROLD DAVIS- Retired air weapons technician Harold Davis is the current president of the Persian Gulf Veterans Association and advocates for the soldiers who are still suffering the effects of the conflict, including Gulf War Syndrome and PTSD, a quarter-century later. 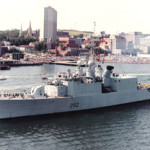 PHOTO COURTESY OF HAROLD DAVIS- The HMCS Athabaskan leaves Halifax Harbour on Aug. 24, 1990, heading to the Persian Gulf to provide support to coalition forces fighting in the first Gulf War. 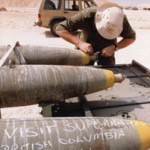 PHOTO COURTESY OF HAROLD DAVIS-The artillery comes with a message from home.