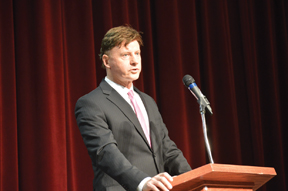 PHOTO BY TIM KALINOWSKI- Dan Smith, senior partner at the Smith and Hersey law firm, addresses Bill 6 and other legal issues with the crowd at the Cypress Centre auditorium in Medicine Hat last Tuesday evening.

By Tim Kalinowski
Associates and partners within the law firm Smith and Hersey held a seminar on Bill 6, (The Enhanced Protection Farm and Ranch Workers Act,) and other issues related to agriculture, last Tuesday evening at the Cypress Centre Auditorium. About 200 individuals from the local farm and ranching community came out to ask questions and hear how these matters might apply to their own situations. The Act is currently under discussion in Edmonton, and the government has said it will be designing Occupational Health and Safety (OH &S) rules specifically tailored toward the Alberta agriculture community, and has already allowed family farm exemptions from Workers Compensation (WCB).
The seminar reminded farmers and ranchers that OH & S and WCB now applied to their operations, and they had until the end of April to register for WCB for their paid employees. The partners (Dan Smith, Simon Hersey, Reid Wilkie and Shane Dyer) each took turns explaining various aspects of what the Act could mean to local farmers. One of the most confusing issues for those present was how family farm exemptions would be applied and who would fall under the definition of that.
Shane Dyer took the lead on that question. He explained that the family farm definition was really quite broad and would cover grandparents, grandkids, first cousins and even uncles and aunts. As for daughters and son-in-laws, they would also be exempted from WCB as long as they stayed married to the spouse with a direct ownership connection.
The problem, said Dyer, was that if only one person in the ownership structure of the farm, (as in those who hold actual ownership shares), is not considered a relative then the entire rest of the ownership group, family ties or not, would no longer be exempt from WCB. So if a son and daughter-in-law got divorced, for example, Dyer said she would no longer be considered family and therefore the entire ownership group would have to begin paying into WCB.
“When trying to determine how this is going to apply to your farm operation you have to ask yourself two questions,” said Dyer. “The first question you have to ask yourself is what is the ownership structure of the operation. The second question is who do I employ? Am I employing non-family members?”
On the second question Dyer also said there were also some options farmers: They could create a new share holder agreement which includes any long time employee, (something not legally recommended), make that employee a “director” in the farm operation, (a good legal option to avoid paying WCB if the long time employee is agreeable to taking on new director responsibilities on the farm). And for short term hires, Dyer said you can likely classify most as contractors if they bring their own equipment or tools to work on your farm. For a custom harvester, for example, if he brings workers to your farm to do a job he or she would be responsible for their own employees as far as WCB is concerned.
Dan Smith, senior partner at Smith and Hersey, said he hoped those coming out would get some good information from the seminar.
“(Bill 6) is the biggest change in farm and ranch law in the last 75 years,” said Smith. “Our firm represents a lot of farmers and ranchers and they deserve to know what is going on. The whole point of these seminars is to explain to people and tell them the truth so they know what Bill 6 means (to their operations).”