Posted on March 7, 2016 by Commentator/Courier 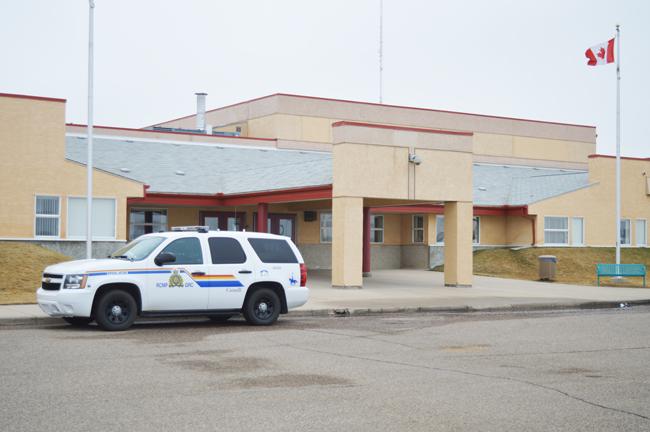 Photo by Tim Kalinowski Taking no chances: RCMP were on hand at Eagle Butte High School all day Monday as a precaution after threats were texted to five students in the area.

A number of schools in the area, including Eagle Butte High, were on under a secure and hold order as police tried to track down the source of a threatening text message. Redcliff RCMP were also on hand at the school all day to be safe. Five students received the message on Sunday night, which read: “You do not realize how long I’ve been hunting you. You don’t know me but I know you. I am here to deliver you a warning. I have been a shady stranger most of my life, shifting towns, hitch hiking when necessary. I have been under the radar under the Canadian government since I was 7. I am a ghost. I am sick of some peoples nonsense therefore tomorrow will be my first shootout. I am going to medicine hat to shoot (name redacted), (name redacted), (name redacted), and (name redacted). Anyone else who is with them is a dead man walking. Im going to hunt them down and make it look suicidal. They have ruined my life and I will have my revenge, for my sake and the others they have wronged. If they try to run or hide bombs will be thrown at them.” Medicine Hat Police Service reports that three of the threatened were students in the Catholic division, one was from the rural Prairie Rose division, and another was not from the area. They are currently investigating to determine the origin of the threat and to identify who may be responsible. Medicine Hat police believe that text message threats made against the high school students were done by someone local. “It’s going to take some time to drill down and find out who sent the messages here,” said S/Sgt. Brian Christmann of the MHPS. “Because there were actual names identified in the text message, we believe that it’s probably someone local that has done this, so we’re checking into it but that’s going to take some time.” The threatening text message was “very similar” to a prank text sent in the U.S. a couple of years ago, said Christmann. “What legitimizes it is there’s been actual names used — but it’s almost a copy and paste of something that was done in the U.S. a couple of years ago,” he said. Police believe its a probability that whoever sent the text used fake numbers, sending the messages from a website somewhere in the U.S. “So that could take a significant amount of time, if we get it back at all,” said Christmann. As well, Christmann said that at least two of the students whose names were included in the texts have informed police that they have received similar threatening texts before. “It’s the first time the parents were aware of this — the kids didn’t tell the parents. But it’s the first time their names have been mentioned in the text message,” Christmann said. Police were originally notified of the texts Sunday evening. “The text message didn’t contain any (mention) about schools,” said Christmann. The MHPS patrol team initially went out to track down the kids and parents to talk with them and to “get a feel for what’s happening.” The Major Crimes section, whose starts shift at 7 a.m., then moved forward with the investigation. Eagle Butte High School remained in secure and hold mode all day Monday as a precaution. The RCMP said it would be helping with the ongoing investigation. “Due to the nature of the text messages, Redcliff RCMP is investigating alongside the Medicine Hat Police Service,” said the RCMP in a statement released Monday. “Work is also being undertaken with the Prairie Rose School Division during this time to determine the best course of action for all involved at the school.” Anyone with information in relation to this threat is asked to contact the MHPS at 403-529-8420. -With files from the Medicine Hat News