First engine on track June 1 as Forty Mile Rail Line finally gets up and running. 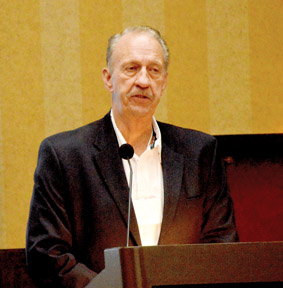 PHOTO BY TIM KALINOWSKI- Len Mitzel, spokesperson for the Forty Mile Rail Line made a major announcement at the Local to Global conference on Friday.

By Tim Kalinowski
Shortline railway service will be returning between Stirling, Foremost and Medicine Hat as of June 1.
Forty Mile Rail Line spokesman Len Mitzel made the announcement during the Local to Global conference at the Medicine Hat Lodge on Friday. According to Mitzel, the Forty Mile Rail Line will mainly be dedicated to hauling grain and pulse crops for the time being.
“Forty Mile Rail’s main focus is to establish itself as a reliable delivery agent of its customers products to the main line, and from there these products are moving to markets, wherever they may be,” he said. “The primary market for Forty Mile Rail service is expected to be grain and pulse production. Other industries also have potential, like oil movement and non-grain products.”
Mitzel said there are over 100 shareholders invested in the new shortline, which will be based in Foremost, representing about 400,000 acres of production. Mitzel was enthusiastic about the potential for the shortline to have a significant economic impact for producers and companies in its operating area.
“We will see the benefits,” insisted Mitzel when asked the question by an audience member in a Q & A following his presentation and announcement. “The interest that has arisen now from subsidiary companies and others in saying this is something we can maybe tag onto already coming in. I have had meetings with various companies, whether they are small grain companies or companies not related to grain movement, wanting to know if this is something they can do. And they are looking at that to see if this fits in with their future plans.”
The main centre of the line will be the double buffalo style granary in Foremost, which will operate as an open elevator with an agent on site to coordinate with local producers and companies.
“There is not one grain company who has one shipper control of it,” explained Mitzel. “So there will be 16 or 18 different companies that will have access to that elevator. There will be bid prices coming in every day. So there will be someone (on staff) who will work as a broker getting in touch with producers. He or she will know what products they have on the particular farms that are available which are not under contract, and will be letting producers know what the spot prices are for that day.”
Mitzel pointed to this successful business model already existing in Saskatchewan on several of the province’s ten shortlines. The Forty Mile Rail Line will only be the second shortline railway established in Alberta. The Battle River Railway based in Forestburg (about 124 km northeast of Red Deer) began operating in 2010.
Mitzel said he was excited to be part of this new chapter of rail service in southeast Alberta 103 years after the initial establishment of the railway in his home community of Foremost.“It’s really exciting to be a part of this,” he said. “This was something that was discussed by a few of us 25 years ago when the rumours of change (to local rail services) began. It’s been a lot of work. It has taken a lot of time. But we feel it is truly worthwhile for our communities as a business opportunity.”