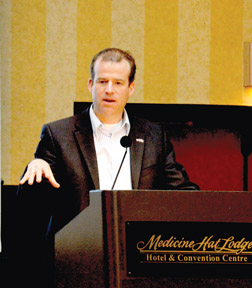 PHOTO BY TIM KALINOWSKi- U.S. Consul General Tom Palaia speaks about Alberta's innovative spirit during his keynote address on the final day of Local to Global on Friday.

By Tim Kalinowski
The two day Local to Global conference wrapped up at the Medicine Hat Lodge on Friday, March 11. The morning kicked off with a keynote speech from U.S. Consul General Tom Palaia. The youthful Palaia is a career diplomat with a sophisticated global understanding gained in several postings around the world. He took over the Consul General position in Calgary last August, and was making his first official visit to southeast Alberta. Palaia said he was impressed by the warmth with which he was received and would be bringing his young family back for a more informal visit to the region this summer.
Palaia showed a good grasp of oil and gas development history in Alberta, and offered an interesting insight into what he thought were Alberta’s strengths as a whole.
“You have tremendous leadership in the civic community. You have tremendous leadership in business community. You have tremendous leadership in your government and at the grassroots level. You take it for granted… I have travelled all around the world and lived all over the world. It is not automatic, and not every community has it. I think one of the great strengths of the Alberta community is that leadership,” said Palaia.
He went on to use Alberta’s  oil and gas industry as a prime example of what he was speaking about.
“I think it is actually an asset that it has been so hard to develop oil and gas in this region,” said Palaia. “The challenge (to develop that oil) is not magic, and it is not terribly lucky. You didn’t just stick a straw in the ground and wait for the oil to come up. This region had to do research. They had to innovate. They had think big. They had to have lots of small businesses starting up to compete and keep pushing the costs down. It’s a competitive nature that doesn’t exist in most energy sectors around the world.”
Palaia concluded his thought by saying that innovative spirit is what will renew Alberta when the current crisis diminishes.
“This is a tremendous asset, having this sort of experience with having to innovate and having to keep your companies competitive and finding better ways to do things. I think this kind of innovative DNA I see when I look around Alberta is going to be the reason why government plans for diversification and the local business community are going to create opportunities. It’s going to be one of the reasons why you will succeed. Because you are able to do this in ways that are special.”
Palaia was followed by several interesting speakers, most notably Tom Hanson of the U.S. Foreign Commercial Service, Mark Hemmes, president of Quorom Corp, who gave an analysis of grain transport in Alberta and Len Mitzel representing the new Forty Mile Rail Line. Local MLAs Bob Wanner and Drew Barnes as well as Assistant Deputy Minister Shannon Flint from the Alberta Ministry of Economic Development and Trade were also on hand for much of the morning.
Mike Deising, director of corporate communications for the Alberta Electric System Operator (AESO), represented a highlight of the day for many present. AESO oversees the practical planning and control of the power grid in Alberta, and has been charged by the Notley government to create new space for renewable electric generation, such as wind and solar, in that grid.
Deising said since Alberta was coming into the game a little later than other jurisdictions AESO has a lot of experience from other regions to reference in drawing up its own plans. He acknowledged doing so would not be without its challenges. Renewables are notoriously difficult to incorporate into standard power grids because of their “ramping” effect. Power only gets generated when the wind blows and the sun shines so it flows onto the grid inconsistently and destabilizes said grid severely if not controlled.
“Our organization is quite worried about it,” admitted Deising when questioned by audience members. “When (ramping) happens we have got to turn down something over here, and we have the tools, technology and the forecasts to be able to do that. That being said, it is a challenge. There is no grid operator that doesn’t think ramping isn’t always something they are watching out for when monitoring those renewables.
“The other thing is those renewables do have to be backed up by what we call “firm generation.” In the future that is going to be natural gas. Coal has really been the baseload of the system. Natural gas is most likely going to play a large role in our future.”
That statement led to questions from the audience about why Alberta was planning to close down or convert coal plants like the Sheerness Generating Station in Hanna if “firm generation” was still needed to back up those renewables; especially since those assets have proven themselves over the long term in Alberta. In response, Deising said he was confident AESO would be able to find ways to make sure the grids flow smoothly even with more renewable energy sources coming online. He said AESO was also not a policy making entity and was “agnostic” when it came to what generation sources the power came from to operate the grid.
“It’s absolutely true we need to back up renewables with the exception of big hydro,” stated Deising. “With solar and wind you have to back them up; there’s no denying that…
But the Government of Alberta made the policy decision to do this shift (away from coal toward more renewables). As the system operator we need to know how we are going to do it to maintain reliability. That’s our pure focus.”
The Local to Global conference was sponsored by the Eastern Alberta Trade Corridor, Palliser Economic Partnership, the Battle River Alliance for Economic Development, and Northeast Alberta Information HUB.