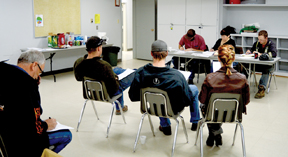 PHOTO BY TIM KAINOWSKI- Seven Persons Community Association members poured over the numbers for this year's budget at their AGM last Wednesday. Costs for hall upgrades and demolition will likely reach an estimated $75,000 this year. However, they also looked to the future with Centennial celebrations on the community's horizon.

By Tim Kalinowski
The Seven Persons Community Association held its AGM at Seven Persons Hall last Wednesday evening. The meeting was co-chaired by Myrna Bushell and Trevor Biemans. Both Coun. Richard Oster and Coun. Dustin Vossler were also present at the meeting as representatives for the region on Cypress County council, and as members of the association.
One of the highlights for the meeting was the hall report which suggests Seven Persons Hall is booked well into next year for various weekend events and weddings. The hall is the largest in Cypress County and rents out for about $600, (depending on the event), for a weekend, making it a popular and affordable venue in the area.
Association members briefly mulled raising hall rental fees heading into 2016 at Wednesday’s meeting, but ultimately decided against it given the tough economy the region is experiencing right now.
The hall is not without its costs, however, as Vossler explained at the meeting. He revealed it was going to cost perhaps as much as $60,000-$70,000 to bring the building up to code which will have to paid out sometime in the next year. The association was going to be applying for recreation grant funding from Cypress County to absorb the lion’s share of that expense.
During the meeting Trevor Biemans announced plans would also be going ahead to demolish the Seven Persons Rink at a cost of between $5,000-$10,000 in 2016. The building is long past its best days and represents a frequent target for vandalism in its current state.
Once the space the rink currently occupies is cleared Biemans said there would likely be temporary outside rink constructed in its place until a smaller, easier to manage facility of some sort could replace the demolished rink on the same spot.
Income for the Seven Persons Community Association was down by over $18,000 in 2015 when compared to 2014. Most of that has to do with the extra expenses the association incurred in rejuvenating the park at a cost of over $31,000. So money well spent, according to Biemans, who presented the financial report to the members.
On a more positive note, Seven Persons will be entering into its centennial year in 2017. Association members will be seeking to start up a local centennial committee with other local stakeholders to begin preparing for the celebration later this year.