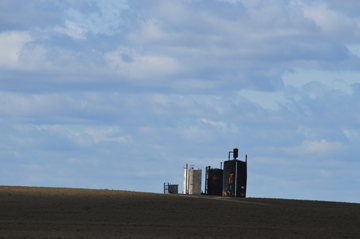 PHOTO BY TIM KALINOWSKI- A 350-litre sweet, heavy crude spill was discovered at a site about a quarter mile outside Veinerville on Mar. 22. Clean-p continued into last week. Pictured is the site of the leak as seen from the roadway.

By Tim Kalinowski
Clean-up continued last week on heavy sweet crude storage site about a quarter mile outside of Veinerville after about 350 litres of the oil was found to have leaked out on March 22. The site is managed by Response Energy Corporation based in Calgary.
Clean-up commenced quickly and most of the leaked oil was vac-trucked out of the site between March 23-25, but it would still take a few more days to deal with all the contaminated soil said Response Energy spokesman Dave Sluggett last Thursday.  Sluggett is listed as a vice president with the company.
“There are no safety concerns for the people of Veinerville,” he said. “The spill was cleaned up after we found it there. It was a relatively small volume of of crude. There’s still some fine-tuning and little bits here and there. The majority of it has been cleaned up and now they are going to have to gather up all that soil and get it to disposal.”
Sluggett said small leaks like this are relatively common in the oil industry, and his company is following the Alberta Energy Regulator’s protocols with this one at Veinerville.
“Unfortunately one of the things about heavy oil is you have some of these spills. Normally we are right on top of it and try to get is cleaned up right away to be sure there is non-ongoing impact to the environment,” said Sluggett.
Sluggett was concerned of reports of unauthorized accesses to the site itself by local citizens and media representatives.
“People are not supposed to go onto lands with oil (tanks and wells) on them; especially close to buildings—like climbing up peoples’ tanks  or poking around around the well head or things like that. That is definately trespassing there, and we certainly don’t want to encourage that. Wandering around a site is definitely not a safe thing to do.”
Here is a copy of a statement released by Response Energy to Veinerville citizens on March 30.
“On or about March 22, 2016, approximately 0.35 cubic metres (350 litres) of sweet crude oil leaked from the separator at the Response Energy Corporation 03-33-12-5W4 wellsite. The crude oil was contained within a small area on the wellsite.  The leak has been sealed and clean-up is underway.  The crude oil has been removed and impacted soils have been moved into containment bins for disposal.  Further testing will be conducted to determine whether additional soil remediation is required.
Response has notified the Alberta Energy Regulator (AER) and they have visited the location with Response operations’ staff. The AER has agreed to the clean-up procedure being conducted by Response.”