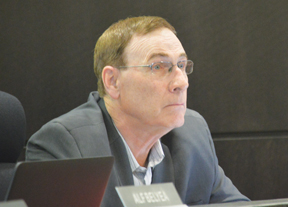 PHOTO BY TIM KALINOWSKI- Cypress County council voted to allow Reeve Darcy Geigle and county staff to open negotiations with the City of Medicine Hat over the cost-sharing of South Boundary Road and Range Road 53. Pictured: Coun. Garry Lentz was one of the councillors who appeared to have had a change of heart since the Mar. 22 council meeting.

By Tim Kalinowski
Council voted to give Reeve Darcy Geigle and Cypress County CAO Doug Henderson the authority to approach Mayor Ted Clugston and the City of Medicine Hat to open discussions about potential cost-sharing on a 2.3 km stretch of South Boundary Road between Range Roads 60 and 61A, which goes past the hamlet of Desert Blume, and on Range Road 53, which leads to the municipal dump past the hamlet of Veinerville, at last Tuesday’s council meeting.
Council voted to open discussions following a report from Director of Public Works Curtis Richter on the estimated costs of repairing both roads.
Richter reported council would have several potential options at Desert Blume. To simply oil that section at a cost of $60,000 on the lower end, or to remove the old milled pavement and apply soil cement and oil at a cost of $378,000 on the higher end. If the county agreed to cost-share on South Boundary Road, it would pick up some lesser percentage of the bill with the city footing the rest.
The Veinerville road, on the other hand, would cost considerably more: $2,123,000 for full asphalt at the high end of the scale, or $764,000 for partial depth milling and overlay at the lower end of the scale. This bill would have to be footed entirely by the county if the city did not agree to come in to pay for some percentage of the work.
At last council meeting most councillors took a hard line that the two costs should be connected in any cost-sharing agreement reached with the city. However, the tone had softened somewhat this time around, with some councillors suggesting a cost-sharing agreement on South Boundary could be reached without any immediate reciprocal promises from Medicine Hat representatives on Range Road 53.
“South Boundary could potentially be done this year,” said Coun. Richard Oster. “The other road is something that would have to be budgeted down the road a year or two.”
“I agree it is two separate issues,” said Coun. Garry Lentz, who was one of the most vocal voices opposed to repairing South Boundary without reciprocation from the city on the dump road at the March 22 council meeting. “And I think we should try to resolve the first one (South Boundary), and we can even put the second one (Rg. Rd. 53) off to future discussions. And at that time, we are still in a good bargaining position as 75 per cent of the traffic (on that road) is the City’s.”
Reeve Geigle wondered openly why some councillors seemed so eager to use Cypress County taxpayer money to repair a city-owned road like South Boundary, and not even agree to broach discussions with the city over a county-owned road like Range Road 53.
“So we offer to fix a road that isn’t ours with no guarantees they are going to do anything with our road? That makes sense.” said Geigle sarcastically.
Coun. Ernest Mudie was also not feeling quite so generous on the matter.
“I agree these are tied together,” said Mudie. “If you can’t resolve both of them at once, you are not going to resolve them separately other than helping them with South Boundary Road and having them ignore our road.”
In the end, council voted to defer decision until after Geigle, Henderson and relevant Cypress County staff had met with their Medicine Hat city counterparts.