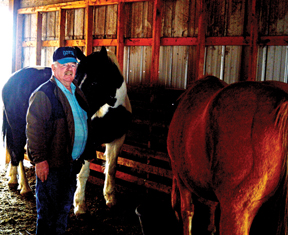 PHOTO BY TIM KALINOWSKI- John Quinn has been running trail rides and driving teams throughout SE Alberta for over 30 years. He has driven for weddings, funerals, hayrides. and many other public events over the years.

By Tim Kalinowski
For the past thirty years John Quinn has been running horses out of his acreage near Echodale Park. Horses have been his life, and there is nothing else he would rather be doing. He knows he’s never going to get rich in the business, but that isn’t what is important anyway.
“(Former Medicine Hat mayor) Harry Veiner once told me to forget about the money,” explains Quinn. “Do what you are good at doing and the money will find you. And he was right. He said to me one time: How are things going? I said to him nothing that getting the winning numbers on the Lotto wouldn’t fix. So he says, you want to be a millionaire? I said Harry, you are a millionaire many times over why wouldn’t I want to be?”
Veiner then said something which Quinn has remembered all his life.
“He asks me how’s your health. I says good. How old are ya? I says 32. He says I’ll tell ya what, I will trade you all my millions for your health and your age. Keep in mind it’s more fun playin’ the game, not winning or losing. Just playin’ is the fun part.”
Quinn has never regretted his choice stay in the horse business.
“We do things like hayrides, weddings and funerals. Lots of stuff like that,” says Quinn. “It’s nostalgia for a lot of people… Anybody that has big horses knows they are so easy to get along with. If you are doing log pullings or other competitions, they will show ya how to win. Anybody with big horses is strictly doing it for the fun. It’s just a love of the horses.”
Driving big horses is not without its challenges and dangers though despite the animals’ “gentle giant” disposition, says Quinn. He has had more injuries than he can count, including breaking both his shoulders, handling his teams throughout the years.
“Same as any animal you’ve got to be careful,” says Quinn. “They won’t hurt you intentionally, but their accidental hurting you is going to really hurt you. If they step on your foot with their big feet that is really going to hurt a lot.”
Quinn remembers one time taking the bridle off, (“That was my mistake,” he recalls) one of his old Percherons after dropping a woman off at her wedding in Medicine Hat. The horse became startled for some reason, broke loose and took off at a gallop dragging the carriage behind it. Fortunately no one was on it at the time.
He and the bride’s father, a policeman, finally caught up to the horse on the bridge on Altawana Drive. They found the carriage broken into kindling a few blocks away. The best man had to come out in his tuxedo to hold the horse while Quinn and the bride’s father went to retrieve the trailer. It then began to rain soaking the best man to the skin.
Quinn, understandably, felt terrible about the whole incident at the time, but can look back on it now with a chuckle years later.
“I says to the father, ‘I’m sorry and I can’t charge ya for this.’ He says, ‘Are you kidding? No one is ever going to forget this wedding!’
Quinn says what he has always loved best about his business is being able to be involved in so many special occasions in the life of his customers and the city itself. He drives for the hayrides in the community. He drives for weddings. He drives for funerals. And he drives for things like local groundbreakings and other ceremonial occasions.
“It’s just the joy you get out of it,” he says. “It’s also great to get that feeling of the horses workin’ with ya. When you are doing a wedding, they know they are doing a wedding. They get prancy and dancy. At a funeral… I’ll tell you what, when I’m goin’ down the road with that hearse and the horses got the big plumes on top everybody pulls over and stops, and gives this person their due. And the kids love the big horses because they are so intimidating and big. But the horses stand there like a gentle giant and all they want to do is pet the nose and feel how soft it is. The horses love it… You are there to help create a memory.”