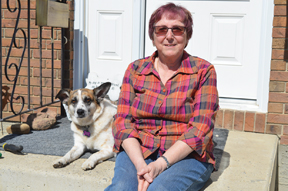 PHOTO BY TIM KALINOWSKI- Sharon Kirvan (pictured with her dog, Sisal) has been named Redcliff's Citizen of the Year. Kirvan volunteers for many local events and organizations, including Meals on Wheels, Redcliff Days, and the Gordon Memorial United Church.

By Tim Kalinowski
Redcliff’s Citizen of the Year for 2016 is Sharon Kirvan. Kirvan has lived in the community for almost her entire life and has always been involved, in some form, as a volunteer in town. That’s over 60 years of helping to make her hometown a better place to live.
“I moved back here by choice,” says Kirvan. “I didn’t have to live here. The reason I chose to do that was because of the community. I know my neighbours, and I know a lot of the older people in town having grown up here. I enjoy going out to the different events and meeting with all the people in town. It is just so much nicer to live in a small community. I have a lot of pride in my hometown.”
The origins of Kirvan’s commitment to community go back to her parents George and Margaret Blades, who instilled in Sharon and her sisters a sense of duty and pride in being Redcliffians.
“Both my parents worked at Dom Glass,” remembers Kirvan. “They both volunteered. My mom was a Guide leader and my dad coached baseball. They were both really involved in the golf course, and my dad was even a town councillor at one time. He was involved in the union at Dom Glass, helped found the local credit union and he was a firefighter; that too was like family to him.
“They sort of set the tone for my sisters and I. We were all involved in Brownies and Guides, and the youth group and Sunday school at church. We were always involved in the community.”
Kirvan worked as an administrator at CFB Suffield for 38 years until she retired in 2011. After she retired, she took her volunteer commitments to a whole new level. Kirvan is on the Board of Directors, Board of Trustees and is the Treasurer for Gordon Memorial United Church in Redcliff. She served on Redcliff’s centennial homecoming committee. She also volunteers for Save Old Souls and the SPCA in Medicine Hat, and has been a foster mother for several of the older dogs brought in. Her biggest commitment in the town, she would say, is probably helping out with Redcliff Days and Meals on Wheels.
“I started volunteering for Redcliff Days quite a number of years ago. At that time it was called ‘The Redcliff Fun Festival Society.’ It wasn’t run by the Town. It was run by a group of volunteers. I started volunteering with them in 2003, and ever since then I have been working with Redcliff Days. I started doing Meals on Wheels when I retired. And I really enjoy that because, there again, living in the community a lot of the people I am delivering meals to were people I knew growing up. That was neat when I first started; to reconnect with some of these people who are my parents’ age.”
Kirvan can’t say enough about the Meals on Wheels program and her fellow volunteers who work to make seniors’ lives just a little bit brighter in the community.
“Sometimes you are the only person they may see that day, and I think that is really important,” states Kirvan. “It’s not just walking in and dropping off a meal and leaving.  Sometimes you do something for them that needs doing, and they look forward to seeing you. You sit and talk and chat to them for awhile. That one on one contact is important, and it’s a daily thing for a week at a time.”
Kirvan hopes her Citizen of the Year Award will raise awareness about the program for the local seniors who could use its services.
“I would really like to get the word out to people. I am sure there are more people out there who could use it. Meals on Wheels is subsidized by Family Services in Redcliff and people should call Cindy Murray at the Town office to sign up. I think it is a good deal in Redcliff, and people don’t really realize how cheap it is.”
Other than that, Murray is thankful to those in the community who nominated her.
“I was not even sure I should accept it,” she says bluntly. “I know there are people who work as hard as I do, if not harder. But (the Lions) said to me, for the people that nominated you, you are not doing a good service to them by saying no. My family is also thrilled I am getting the award.”
Murray says everyone who lives in Redcliff should try to give back in some way and take pride in their hometown.
“Community stuff is really important. I think it is important to stay close to the community and be a part of it. Having grown up here, and having been in town for most of my life, I think it is a wonderful thing to be a Redcliffian.”