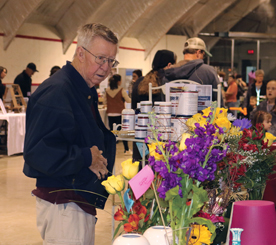 PHOTO BY JAMIE RIEGER- Fred Mellen stops by one of the display tables at the Bow Island Chamber of Commerce trade show, held on Friday and Saturday.

By Jamie Rieger
The annual Bow Island Chamber of Commerce trade show, held on the weekend, was a huge success, according to Chamber president, Bernice DeLeenheer.
“We have had no issues from anybody and I have been hearing great things from the vendors,” said DeLeenheer, adding that while the numbers were down slightly, it gave the vendors more time to talk with the people visiting their tables.
Organizers were hoping to have 450 people visit the trade show over the course of the weekend. Friday they saw 230 visitors, and by 1:00 p.m. on Saturday an additional 140 people had stopped by to check out what the vendors had to offer.
The number of vendors were up as more space was made available by not having an entertainment area this year. Sixty-one businesses and organizations set up shop at the two-day trade show.