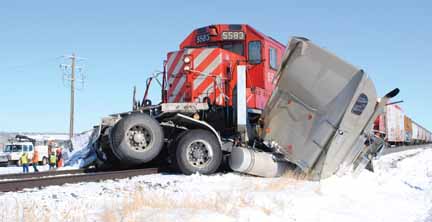 Bow Island town council, at their Apr. 25 meeting, proclaimed April 25 to May 1 Rail Safety Week, in conjunction with Canadian Pacific and Canadian Pacific Police Service, who are running a cross-country campaign this week.
CP and CPPS are working with police agencies and schools to educate motorists, pedestrians, and the public about being safe at rail sites.
Crossing arms were installed at the Centre Street crossing in recent weeks. The Town had been working to get them installed after several incidents of collisions between vehicle and train and one fatality involving a pedestrian.
“We want people to be aware that we have three more crossings that don’t have arms. This is a very busy line with lots of traffic and people need to be vigilant. Whether you are driving walking, or biking, you aren’t going to win a battle with a train,” said Reynolds, adding that the area around the railroad tracks is not a place for children to be playing.
According to a media statement issued by Ken Marchant, CP police chief, the number of crossing and trespassing incidents declined in 2015 based on a five-year average, but 31 pedestrians and 14 drivers lost their lives.
“CP believes that one incident is too many. That is why we are working tirelessly, along with our community partners, to promote safety in and around railway property throughout Canada,” Marchant wrote.
A group of dedicated railroaders and concerned citizens make up Operation Lifesaver, a partnership between the Railway Association of Canada and Transport Canada, in cooperation with the rail industry, government, police, unions, and other organizations. The initiative focuses on raising awareness to the hazards around rail property and trains. Their ultimate goal is to prevent incidents between pedestrians or vehicles and trains from occurring.
Operation Lifesaver was formed in 1980.
For further information, visit http://www.operationlifesaver.ca